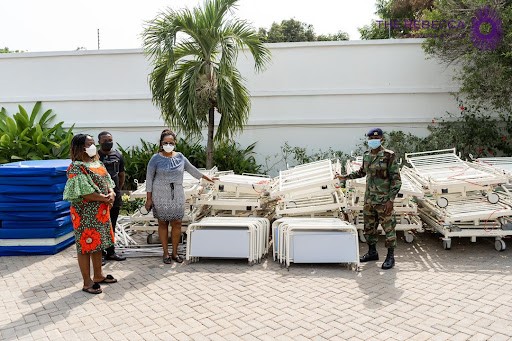 Some hospitals across the country would soon receive hospital beds to help reduce the “no bed” syndrome in public health facilities.

This follows the donation of 176 beds to the Rebecca Foundation which are to be distributed across the country. The beds which cost ₵ 200,000 were donated by ‘Orca Deco’.

At a brief ceremony to receive the beds, the First Lady, Mrs. Rebecca Akufo-Addo asked other corporate organizations to respond to calls to support women, children and the vulnerable in society.

Many have died prematurely because health facilities have turned patients away due to the lack of beds.

In 2018, lack of beds at the Korle Bu Teaching Hospital, which is the country’s biggest referral center forced the facility to suspend referrals from other health facilities.

Some of those who could not have beds for treatment, were attended to in plastic chairs, wheelchairs and on the ground. This generated public outcry with the government making a pledge to deal with the phenomenon.

About a year ago, the government began distributing 10,000 beds to health facilities, which was  said not to be enough.

According to the First Lady, while the government works to support the needy, corporate Ghana and philanthropic individuals should equally come to their aid.

Managing Partner at ‘Orca Deco’, Rayan Sharara, lauded efforts of the First Lady and the Rebecca Foundation toward providing support for maternal and child healthcare in Ghana.

“The phenomenon of lack of beds in hospitals for new patients, particularly in the emergency departments commonly called the ‘No Bed Syndrome’ which sometimes resulted in preventable deaths is very disheartening and worrisome,” he said.