Doctor warns against holding in farts 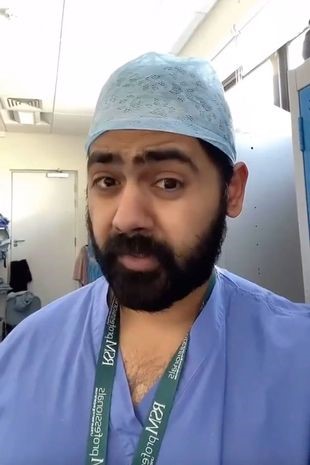 Doctor Karan Rajan has shared some key fart facts on TikTok, including the gross reason you should never try to hold back from letting rip – no matter how rude it might seem

Society tells us that breaking wind in public is generally bad manners – but did you know it can actually be worse to hold your farts in?

Dr Karan Rajan, an NHS surgeon, has warned that holding in your flatulence could cause the gas to re-enter your bloodstream with disgusting results.

In a TikTok video, @Dr.karanr explained: “If you hold in a fart too long, it can be reabsorbed into your bloodstream and breathed out when you exhale.”

The doctor has racked up over two million views for his video on interesting fart facts, which includes information on how many times a day we break wind on average, as well as the science behind why we fart.

He claims people trump 14 times a day on average and says “the more the merrier” as it’s important to let out the build-up of gas.

Dr Rajan said: “If someone tells you they don’t fart, they are lying and you should disown them immediately. Or they’ve got a bowel obstruction, which is a medical emergency.”

The doctor also told his 4.2 million TikTok followers that their average daily fart volume is enough to “fill up a medium sized balloon”.

He then explained the first fart of the day is usually the biggest, and even detailed the facts behind where our wind comes from.

He added: “75 per cent of farts are produced by bacteria in the large intestine.

“Digested food that isn’t broken down is chewed up by bacteria that produce microscopic farts that accumulate and become one of your regular farts.

“25 per cent of farts are swallowed air that you don’t burp and dissolved gases from the blood making its way into your intestines.”