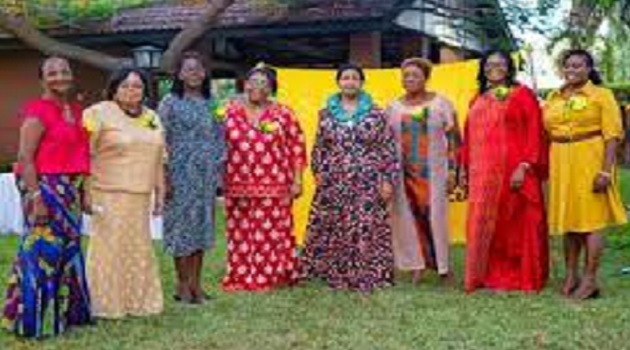 Zonta Club of Accra, the premiere Zonta International Club in Africa and Ghana has sworn in new officers for the 2021-2923 biennium at a recent ceremony in Accra.

In her acceptance speech, the new President of the Club, Zontian Vivienne Idun-Ogde spelt out her vision to rekindle an Adolescent Reproductive Health Project in the Ga East Municipality, a vision aligned to that of Zonta International and Zonta District 18 of which Ghana is a member.

She pledged that her Board will extend the project to 20 more schools in other sub-municipalities including the Haatso maternity Centre which is expected to be used as an advocacy centre.  This project was originally started during the presidency of Zontian Janet Tamaklo in 2017-2018.

All the visions are appropriately set within the UN Sustainable Development Goal 5(SDG5) which focuses on empowering women and girls.  To this end, Zonta Club of Accra will work closely with the vision of Zonta District 18 to empower women through safe motherhood and advocacy against teenage pregnancy, forced and early marriages.

Explaining further her vision, the Club’s President, Zontian Vivienne Idun-Ogde said before the implementation of the project, the adolescent health service in the Ga East municipality recorded a high incidence of teenage pregnancy.  With the intervention of Zonta Club of Accra in 2017-2018, supported by the United Nations Population Fund (UNFPA), an evaluation at the end of the project showed a positive impact in the communities.

She emphasised child marriage saying, “It is not only a violation of human rights, but it is also a crime.”  She said child marriage inhibits social and economic development, especially where it curtails a girl’s right to education.

She said her Board, in addition, will focus on the Club’s long-term project of a shelter for battered women located at Amanfro in the Greater Accra Region and actively look for partners including NGOs or a Government Agency to make the shelter a dream place for battered women.

The Guest Speaker, Madam Agnes Kayitankore, Deputy Country Representative of UNFPA commended Zonta Club of Accra for their continued commitment to undertaking activities and partnering to improve the lives of the vulnerable, especially women and girls in various communities.

She said the UNFPA is very much concerned by the incidences of child marriage, a violation of the human rights of young girls.

As part of the organisation’s commitment to assist vulnerable women and girls, UNFPA Ghana has in particular established a Child Advocacy Tool to encourage and educate community groups on the impacts and consequences of child marriages, cohabitation, and adolescent pregnancies.

She recommended that collaboration efforts with Zonta Club to continue to empower adolescent girls saying, “The concerned efforts and actions will not only benefit vulnerable women and girls but the entire population”.

In a goodwill message, the First Lady, HE Madam Rebecca Akufo-Addo commended Zonta Club of Accra for its commitment and passion for the advancement of women and girls.  She added, “Together as women, we have the power to change the lives of women and girls by combatting laws and societal norms which affect women adversely.

The swearing-in event was witnessed by past District 18 Officers, past presidents of Zonta Club of Accra, members of all Zonta Clubs in Ghana, and other dignitaries.