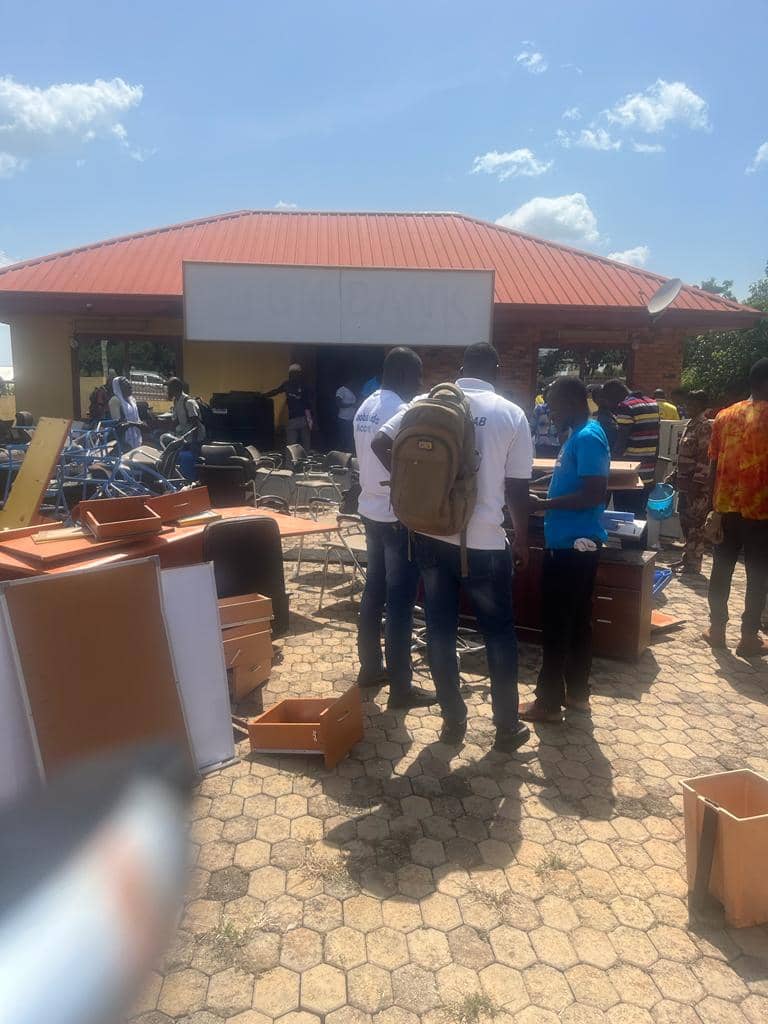 In the midst of suffering in the land called Ghana, wanton financial loss and destruction of assets are going on.  The Today Newspaper has received messages documenting sale of assets in GN Bank locations such as Yendi, Salaga, Mankessim, Begoro, Hohoe and others.

When contacted, officials at the Receiver’s office are deny any knowledge of auction sale of GN Bank properties. If that is the case, then who is causing the sale of bank assets?

It is clear that the sale of GN Bank’s properties without the “knowledge of the Receiver” and the owners of the bank has now become a routine weekly trading practice at the various locations of the bank. The latest auctioning of GN Bank properties took place at Hohoe and Begoro in the Volta and Eastern Regions this week.

The auctioning sale is going on at a time owners and shareholders of GN Bank are challenging the revocation of the Bank’s operational license by the Bank of Ghana at the court. Therefore, by the spirit and letter of the law, any such sale should have been on hold, pending the final determination of the case. But this has not been the case.

It will be recalled that Dr. Papa Kwesi Nduom and other shareholders filed a lawsuit on 30 August 2019 against the Bank of Ghana, Ministry of Finance, the Attorney General and others seeking to reverse the revocation of the GN Bank license.  That case is still on at the Supreme Court.  Specifically, the complaint documented the statement of case as follows;

a. directing the 1st Respondent or its agents, privies, assigns or workmen howsoever described (and including the said Messrs Eric Nana Nipah, Receiver) to, forth with, restore the 4th Respondent to its specialised deposit-taking licence pending the determination of the originating motion; and

b. restraining the 1st Respondent or its agents, privies, assigns or workmen howsoever described (and including the said Messrs Eric Nana Nipah, Receiver), from further interfering, directly or indirectly, with the rights of the 4th Respondent’s shareholders, directors and management to possession, management and control of the 4th Respondent’s business activities pending the determination of the claim in the originating motion.”

On Wednesday, 26th October, 2022, auctioneers stormed the GN Bank offices at Hohoe and Begoro where they traded the Bank’s properties like computers, fridges, air-conditioners, tables, chairs and many others.

A similar exercise took place at Groupe Nduom’s Central Regional office at Mankessim in the Central Region last week. GN Bank has a branch office in the Mankessim building.

In the Mankessim exercise, equipment like that of the Hohoe and the Begoro branch offices were auctioned by the Receiver’s appointed team. Our sources at the Receiver’s end however, disclosed that the auctioned items were not necessarily GN Bank facilities. Instead, they were confiscated properties of other entities that had been kept at the Central Regional head office of Groupe Nduom.

As shareholders of GN Bank ponder and struggle to find answers to the handling of the bank’s facilities by Receiver Nana Nipa, others privy to the alarming ruin of GN Bank facilities are left in awe about the state of resignation shown towards the Bank’s properties by the receivership group.

Today reported early this month about how GN Bank facilities are left to rot off in the bushes at its branch location in Sekondi in the Western Region. The dilapidating state of the building only adds up to the sore state of some of the bank’s properties ranging from vehicles, buildings, air-conditions, chairs, tables and many others that have been placed under the trust of the Receiver.

It’s significant to note that the Sekondi branch of GN Bank is located in a prime area in the twin-city and not some isolated bush where the eco-system could be a contributory factor to the rapid decay of the building. The decadence best describes the sordid state of the Sekondi location of the bank.

The building offers a pictorial presentation of utter neglect that has led to decay, destruction and disintegration. The walls of the Sekondi location building are peeled off; spirogyra taking over the building with unkempt décor. Electrical wires are also left hanging on the walls posing danger to people and the environ. Parts of the roof of the Sekondi building are ripped off.

Quite recently, this paper also covered how the Accra headquarters building of GN Bank was caving in, toilet facilities being destroyed and the general conditions of the building in a deplorable state. Before this reportage, Today had reported how cross-country vehicles belonging to GN Bank were taken to an unknown destination; and similarly how four pick-up cars that were at the Fufulso branch of the bank in the Northern Region are untraceable.

The Receiver has since his appointment in 2019 when GN Bank’s license was revoked, supervised what seemed like a deliberate and wanton destruction of the bank’s facilities with glee. The assertion is grounded in reports received from local people throughout the country where the bank’s branches can be found.

The locals consider that the Receiver Nipa pretends to be solving the problem; but would end up exposing his obvious lack of commitment towards the office he presides. Indeed, Nipa and his office are aware of how customers of the bank are emotionally attached to the ‘People’s Bank’.

Many of the GN Bank customers, mostly people within the low income group, consider the bank as theirs because at the prime of its operations, GN Bank created wealth for them, irrespective of the size of their deposits.  It’s such pain GN Bank customers and former staff members who often hint the company’s owners about the deplorable state of some of their buildings in the Northern part of the country and attempts by some assigns of the Receiver to steal some of the bank’s assets which include vehicles, louvre blades, air-conditioning units, furniture among others.

Today uncovered from further sleuthing that those Nipa gestures are presumptuously put up to calm the tempers of the ever growing GN Bank customers who constantly lament the grievous state of the Bank and its facilities. These persons have constituted themselves into underground patrol guards watching over the company’s properties not through any form of inducements but, as some of them told this paper “we owe a duty to guard and safe GN Bank facilities because it brought to us work, happiness, wealth and joy”.

Some of the local watchers even claim the bank employed many of their relations, some of who had stayed home for years after completing their education. Others believe but for GN Bank, they wouldn’t have experienced banking their entire lives because of their obscure locations. A number of  chiefs are a part of the GN Bank watch brigade.

They have detailed their subjects to keep a watchful eye on the Bank’s facilities in their towns and villages, with some being bold enough to tell government to give back GN Bank licence to the rightful owners. It’s such bravery acts of people who believe in the GN Bank concept of bringing banking to the doorstep of the ordinary Ghanaian that often forces the Receiver to get into the cosmetic overdrive suggesting that he is acting to complaints made by GN Bank owners on the stinking state of their facilities.

His actions are however temporarily jolted by what looks like prescribed orders that define his tenure. Too soon, his real intents are established. His attempts to deal with reported GN Bank cases become just stoical façade. It’s one narrative that has given credence to the popular belief among some watchers of the GN Bank saga that the Receiver is only being cosmetic with his resolution of the GN Bank issues.

The real reason, according to such industry watchers is deflecting people’s minds from the directive from his paymasters that he ensures that in the event that the licence is given back to its owners, the company would have suffered irreparable damage and thus unable, to restore the bank to its former glory.