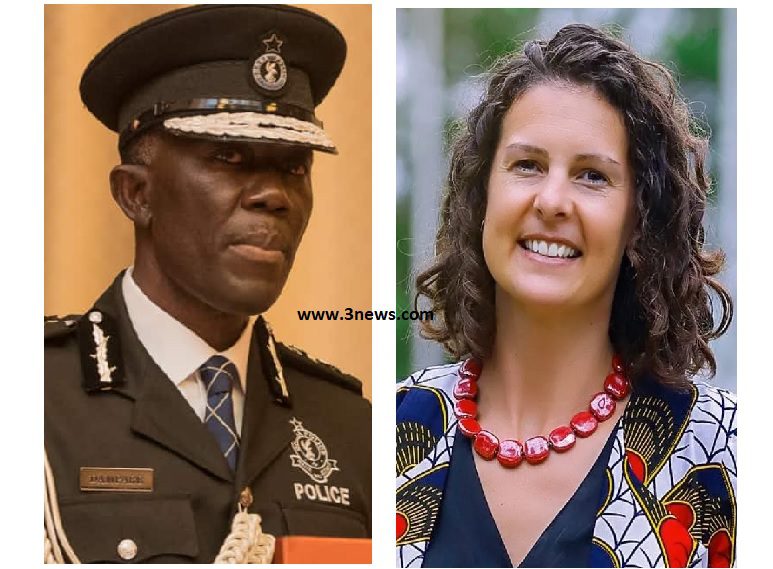 *At British High Commissioner, tells her  to mind her own business

The Ghana Police Service has asked the British High Commissioner to Ghana, Harriet Thompson, to mind her own business.

This is in reaction to a tweet by the Commissioner, Harriet Thompson, in relation to the arrest of Oliver Barker-Vormawor, convener of the FixTheCountry Movement.

This follows his second arrest by the police.

In a four-page letter signed by the Inspector-General of Police (IGP), Dr George Akuffo Dampare and sighted by Today, the IGP noted that Ms Thompson’s act was unprofessional and seeks to undermine the credence of the Ghana Police Service.

The letter follows a tweet by Madam Thompson indicating that she “will be interested to see where this (the arrest) goes’.

The British High Commissioner on May 17, tweeted, “Oliver Barker Vormawor, convener of #FixTheCountry Movement, arrested again, I understand for a motoring offence on his way to court. I’ll be interested to see where this goes.”

Reacting to this, the IGP said the “tweet is a violation of the Vienna Convention on Diplomatic Relations, 1961 which enjoins diplomatic missions not to interfere in the internal affairs of their host country.”

He stressed that all their engagements with the #FixTheCountry activist have been in accordance with the supreme laws of the country, thus, the Commissioner’s comment was “obviously made from either a biased or uninformed position.”

IGP Dampare further cited occasions in Britain where “religious groups” were tagged as terrorists for threatening the security of their country.

He subsequently quizzed the moral authority Madam Thompson had questioning the modus operandi of the Ghana Police Service in dealing with persons who threaten the nation.

“As our former colonial power and the source of our legal, judicial and criminal justice architecture and indeed, of our Police Service, we continue to look up to Britain among other countries for guidance with regard to how difficult situations are handled.

“We note that some leaders of faith-based organisations in your country made pronouncements that were considered as national security threats, they were branded as terrorists, arrested, prosecuted and in some cases were extradited. This, we believe, your country did in its quest to safeguard the security of the state and ensure the sustenance of the peace the inhabitants enjoy,” he stated.

He further quizzed, “do you not think we the Ghanaian people also deserve a peaceful country?”

After providing a comprehensive detail of police interactions and engagements with the activist, IGP Dampare asked the Diplomat to mind her own business.

“For the moment we will recommend the Ghanaian saying, that might guide you in your diplomatic engagements. The saying goes ‘Di wo fie asem’ to wit learn to keep within the limits that concern you.”

Earlier this year, Mr Barker-Vormawor was charged with threatening the security of the state and granted bail in April.

He was arrested again on Tuesday, May 17, by officers of the Motor Traffic and Transport Department (MTTD) of the Ghana Police Service and charged with careless driving

Meanwhile, Mr. Barker-Vormawor says he has been arrested three times this year alone due to his activism.

He added that following those arrests, he has been sued three times – twice by the Ghana Police Service and once by the Electoral Commissioner.

“Very bizarre that I had never been arrested in my life; yet, in just one year of #FixTheCountryactivism, I have already been arrested three times.

I have also been sued three times, twice by the Ghana Police Service and the Electoral Commissioner”, he wrote on Facebook after his re-arrest on Tuesday morning.