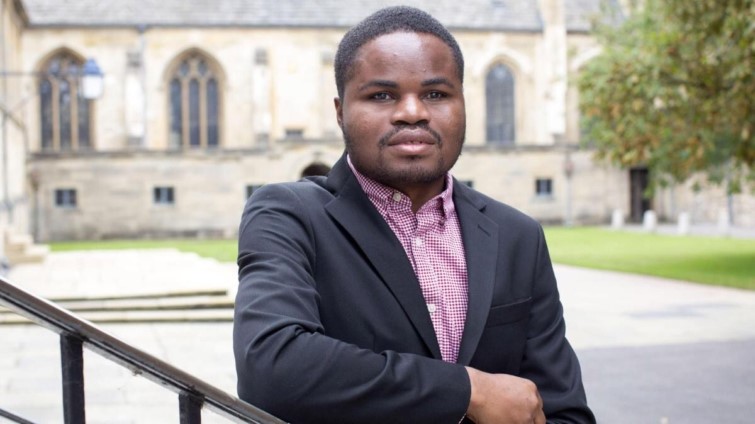 A visually impaired Ghanaian, Ebenezer Azamati, has been elected is the president of Oxford University’s African Society (AfriSoc). Mr. Azamati is currently pursuing a doctorate (PhD) degree at the university.

In a social post, AfriSoc SAID Ebenezer Azamati polled a landslide victory in its polls. AfriSoc is a highly recognized group at the University a distinctive reputation of seeking and championing the cause of African students at the University.

The society also tracks the progress and the well-being of its alumni across the world. He takes over from Kenyan, Elisha Ngetich who had been serving in that capacity for the last one year.

As President of AfriSoc, Azamati is expected to lead the cause of African students at Oxford University and also check on the extensive alumni of AfriSoc in various leadership positions all over the world.

In April 2020, Azamati, who was the subject of an assault during a debate at the Oxford Union was awarded a Cambridge International Scholarship to undertake a PhD in Politics and International Studies.

Azamati started his PhD in October 2020 after excelling during the rigorous scholarship application process. AfriSoc wrote of him in their social media post: “Azamati is a Radcliffe Scholar reading for the DPhil International relations at University of Oxford and a member of University College.”

He is currently on the Cambridge International Scholarship, which was started in the 1980s, and is reserved for students from outside the European Union, who, would ordinarily fail to make it to Oxford without financial support.

Azamati was admitted to the University of Cambridge’s Fitzwilliam College at a time he was still reading his M Phil in International Relations at Oxford University.

The October 2019 incident that saw him manhandled during a debate session at the Oxford Union at the University of Oxford triggered a wave of resignation from Union leaders after multiple news websites reported the incident.

The Oxford University Africa Society (AfriSoc) focuses on African affairs at the University of Oxford and seeks to set the agenda for the future of the African Continent by providing a platform for students hailing from or interested in Africa to critically engage. Above all, AfriSoc is a community of change agents, passionate about Africa.