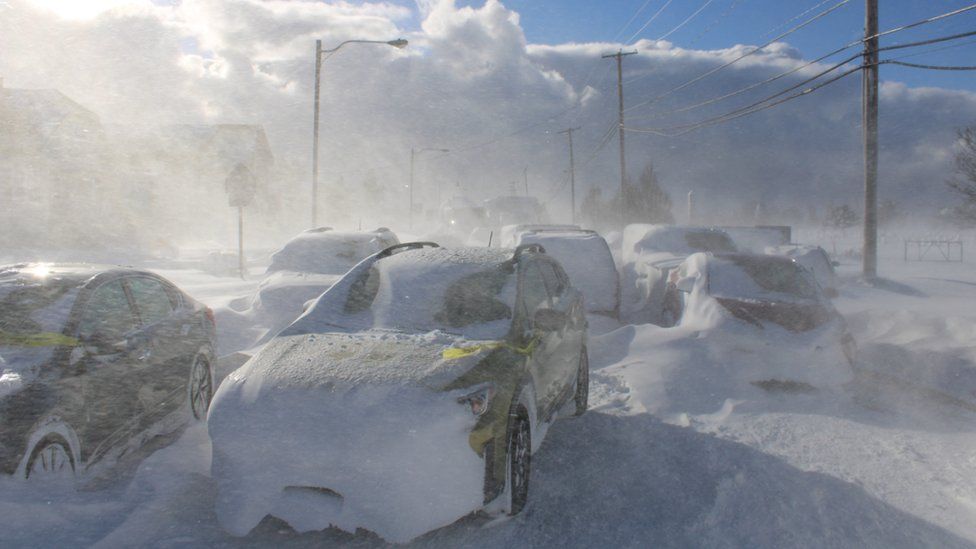 At least 28 people have died in western New York State, most of them in Buffalo, as a monster winter storm continues to batter North America.

A state official said some people had been trapped in cars for more than two days during what was “probably” the worst storm of their lifetime.

Up to nine more inches (23cm) of snow are expected in parts of the state through Tuesday, meteorologists warn.

The storm stretching from Canada to the Mexican border has killed 56 people.

US President Joe Biden approved an emergency declaration allowing federal support for New York State. “My heart is with those who lost loved ones this holiday weekend,” he tweeted.

The owner of a small family-run shop in East Buffalo, who didn’t want to be named, said looters broke into his general store on Christmas Day.

“They took everything. People took toys, electronics and speakers,” he said.

Mark Poloncarz, the executive for Erie County where Buffalo is located, said: “We can see sort of the light at the end of the tunnel, but this is not the end yet.”

“It’s a generational storm,” he said, warning that the county was yet to begin assessing the “full toll”.

Citing the local medical examiner’s office, Mr Poloncarz said many of the victims had died from heart problems while shovelling or blowing snow. Some were found dead in their vehicles.

State Governor Kathy Hochul, a native of Buffalo, earlier said: “It is [like] going to a war zone, and the vehicles along the sides of the roads are shocking.”

She added that many emergency vehicles had been unable to reach worst-hit areas or had got stuck in snow themselves.

One local family with young children – aged two to six – had to wait for 11 hours before being rescued in the early hours of Christmas Day (Sunday).

“I was basically just hopeless,” the father, Zila Santiago, told CBS News. He said he had managed to stay warm by keeping the engine running and kept distress at bay by playing games with the children.

More victims are expected to be discovered once melting snowdrifts reveal trapped vehicles and allow access to remote homes.

The “bomb cyclone” winter storm – which occurs when atmospheric pressure plummets, causing heavy snow and winds – has disrupted travel across the US.

Forecasters say it will ease off in the next few days, but the advice remains to avoid travelling unless essential.

Over the weekend an estimated 250,000 homes and businesses experienced blackouts – although power has been steadily restored.

The western US state of Montana was the worst hit by the cold, with temperatures dropping to -50F (-45C).

In Canada, the central province of Ontario and Quebec, in the north-east, bore the brunt of the storm.

Ontario’s Prince Edward County, along Lake Ontario, declared a state of emergency and had to take snow ploughs off the streets because they were in danger of getting stuck, Mayor Steve Ferguson told CBC News.