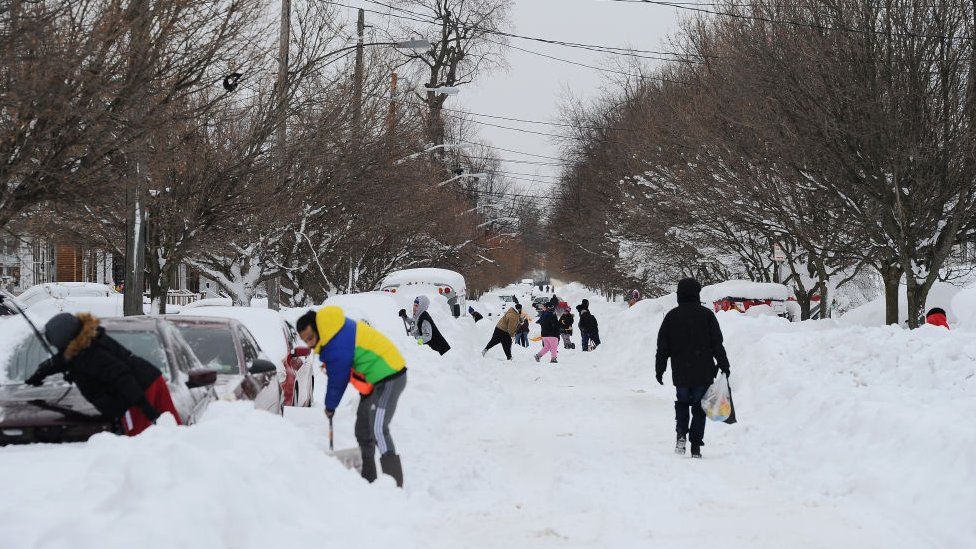 A powerful winter storm that slammed North America has claimed more lives in the US state of New York, local officials say.

At least 34 people have died in Erie County, which includes the city of Buffalo, county executive Mark Poloncarz said on Wednesday.

Authorities are still trying to identify three of the victims.

The storm that swept across the US over the holiday weekend has killed at least 60 people in eight states.

There have now been more fatalities in Erie County in the last few days than during the infamous Buffalo blizzard of 1977. Twenty-nine people died in that storm, according to the National Weather Service.

“It’s a horrible storm with too many deaths,” Mr Poloncarz said during a press conference on Wednesday morning.

But conditions in some of the hardest-hit regions in the US – including New York – are starting to improve.

In Erie County, fewer than 1,000 households are now without power, and 95% of residents should have power restored by the end of the day, Mr Poloncarz said.

The city of Buffalo – which got more than four feet (1.2m) of snow – has made progress clearing roads, county officials said. At least 65% of city streets have at least one lane available for passage, though a driving ban remains in effect due to dangerous conditions, Mr Poloncarz said.

The local Buffalo Niagara International Airport reopened at 11:00 local time (16:00 GMT) after closing last Friday, though nearly all scheduled departing flights for the day were cancelled or delayed, according to the airport’s website.

Buffalo’s rail service is running again on a limited schedule.

The US National Guard is going door-to-door in neighbourhoods in the county that lost power to conduct wellness checks as officials are “fearful” that some living alone may have perished during the storm, Mr Poloncarz said.

With temperatures rising and snow beginning to melt, the county is now preparing for the possibility of flooding, the county executive said.

Elsewhere in the US and Canada, residents are still dealing with the effects of the deadly winter storm as well as new dangerous weather systems, which have caused several fatalities.

States in the western US and the Rocky Mountains region have experienced heavy winds and rain as a result of an “atmospheric river”, a long narrow channel of moisture in the atmosphere that can cause heavy precipitation.

A surge of heavy rain or mountain snow is expected on the west and the US south on Thursday and could continue through the end of the week, according to the Weather Prediction Center.

The system on Tuesday began flooding the western states of Washington and Oregon, where five people died in car crashes as a result of felled trees from the storm, Oregon State Police told local media outlets.

In one instance, Oregon State Police said the severe weather caused a large tree to fall onto the roof of a car on Highway 26 in Clatsop County on Tuesday, killing the 19-year-old driver Justin Nolasco Pedraza and two passengers – a four-year-old child and 41-year-old Bonifacio Olvera Nolasco. First responders found all three dead at the scene.

More than 70,000 customers were without power in Washington and Oregon as of Wednesday afternoon, according to outage tracker PowerOutage.us.

The storm is expected to “linger into the upcoming weekend”, the Weather Prediction Center said.

Some areas could get up to six inches (15 cm) of rainfall.

The Washington state capital of Olympia saw a record high tide of 18.4 feet (5.6 metres), which brought marine life into the city’s streets, according to officials.

A local journalist shared videos on Twitter of jellyfish in flooded city streets and of a local resident who was trying to rescue the animals.

Heavy snow is also forecast for the mountainous regions of Sierra Nevada, Cascades and the Rockies as moist air flows eastward, the Weather Prediction Center said.

Some Canadian residents, meanwhile, are still battling power cuts as a result of the storm, including about 19,000 customers in the province of Quebec, public utility provider Hydro-Québec said on Wednesday.

In Ontario, more than 10,000 customers were still without power, according to power supplier Hydro One.