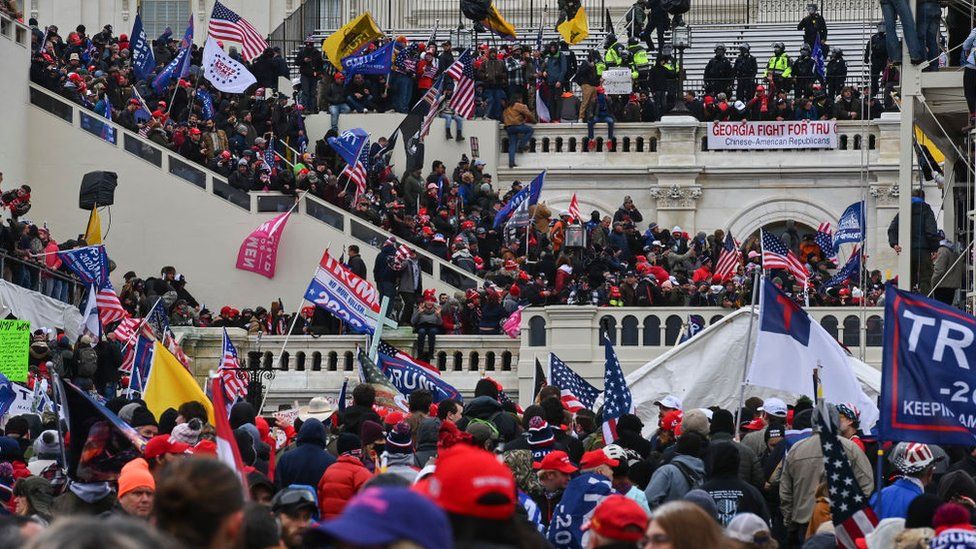 The partner of a US Capitol Police officer who died a day after the 6 January 2021 riot has sued Donald Trump for wrongful death.

Police have ramped up security on Capitol grounds on the second anniversary of the riots.

Hundreds have been convicted so far, but the FBI says there are more at large.

Federal police believe that more than 300 people who committed violent acts that day are yet to be identified.

Among them is a person responsible for planting pipe bombs outside the headquarters of the Republican and Democratic national committees the night before the riots.

The US Capitol riot erupted two years ago as Congress certified President Joe Biden’s victory in the 2020 election.

The mob stormed the Capitol following a speech from Mr Trump, who was speaking at a rally one mile from the Capitol grounds. In his speech, Mr Trump claimed election fraud and called on then-Vice-President Mike Pence to overturn the results.

“We’re going to walk down to the Capitol,” Mr Trump said in the speech. “If you don’t fight like hell, you’re not going to have a country anymore.”

In the same speech he also told them to “peacefully and patriotically make their voices heard”.

During a commemoration event on Thursday at the White House, Mr Biden called the events of 6 January an “inflection point” of US history.

“It’s hard to believe that this could happen right here in America,” he said.

“January 6 is a reminder that there is nothing guaranteed about our democracy,” Mr Biden added.

One woman was fatally shot during the riots by a police officer. Three others who were on Capitol grounds that day died from natural causes.

One of them was Capitol Police officer Brian Sicknick, who died a day after the riots from a series of strokes.

While Mr Sicknick did not suffer any injuries during the riot, a lawsuit filed by his family on Thursday alleges the violent mob played a role in his death.

His family sued Mr Trump on Thursday for wrongful death, claiming that the former president “intentionally riled up the crowd” and that Mr Sicknick died as a result of “the injuries that violence caused”.

“Many participants in the attack have since revealed that they were acting on what they believed to be Defendant Trump’s direct orders in service of their country,” the lawsuit states.

Mr Trump has not yet commented on the lawsuit.

On Thursday, Mr Biden awarded several presidential citizen’s medals to officers who responded to the 6 January riots, including a posthumous medal for Mr Sicknick, saying he “lost his life after protecting the citadel of democracy.”

Since the attacks, a Democrat-led congressional probe also examined Mr Trump’s role in inciting the riots.

In December, the US House committee probing the 6 January attack asked federal prosecutors to charge Mr Trump with obstruction and insurrection – marking the first time in US history that Congress referred a former president to be criminally prosecuted.