THE DESTRUCTION OF GHANA’S INVESTMENT SECTOR 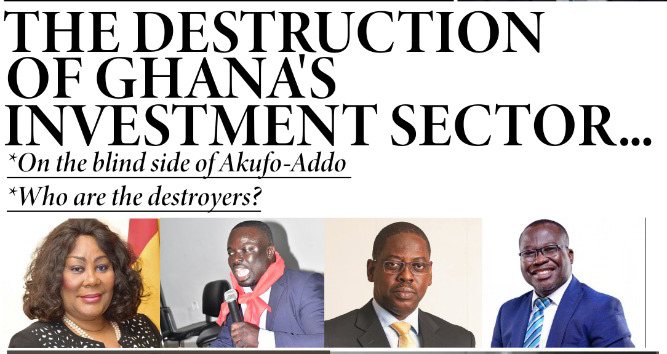 *On the blind side of Akufo-Addo

*Who are the destroyers?

The Today Newspaper’s investigation into the happenings of the Financial Sector Reform program supervised by Mr. Ken Ofori-Atta, the Minister of Finance & Economic Planning has been covering at the banking, insurance and investment sectors.  Our investigations involving the insurance sector is progressing and will soon yield results just as that of the banking sector continues.  At first look, it may seem the investigations have focused solely on matters affecting Groupe Nduom companies.  However, our purpose has been to seek the truth and uncover what stands in the way of an active industry that would support the administration’s stated Ghana Beyond Aid vision.  We use Groupe Nduom companies due to our ability to access documents to prove the validity of the results that emanate from our work.

We have conducted a survey of finance and investment professionals and it is clear to us from our findings that the Securities & Exchange Commission (SEC) and the Registrar-General’s Department (RGD) have set on a course apparently approved by the Ministry of Finance that might do incalculable harm to the investment market well into the future.  To the discerning mind, they are treating investments made by fund managers as if they are demand deposits of banks.  By guaranteeing amounts invested by the customers of Fund Management companies, they are perpetuating the unsustainable thinking that investments only return profits and values only go up.

Today’s research has yielded the following:

We have also learnt that an investor may bear a risk of loss of some or all of their capital invested.  However, these basis and fundamental investment principles are being sacrificed due to the haste with which fund management companies’ licenses were revoked without informed analysis of underlying investment portfolios.

The RGD led by Mrs. Oware and SEC led by Rev. Tetteh (former employee of Databank) have acted to guarantee investments place with Fund Managers in Ghana.  In this, they have fallen into an alliance with groups such as the Aggrieved Customers of Gold Coast Fund Management with one Charles Nyame (who together with other so-called leaders have already redeemed a lot or all of their investments) as its Spokesperson.  It is also rumoured that the MP for Ahwiaso-Bibiani and the former Managing Director of Bulk Oil Storage and Transport Company Limited, and recently appointed member of the governing board of Ghana Civil Aviation Authority (GCAA), Alfred Obeng-Boateng is the lightening rod behind the activities of this group.  Some members of the Gold Coast Group have even boasted publicly in audios reviewed by this newspaper that the Vice President, Dr M. Bawumia is assisting them to pierce through bureaucracies to help them achieve their goals.

SEC and RGD are said to have been working with Mr. Eric Nana Nipah as the appointed Agent of SEC to validate investments made by customers of Fund Managers whose licenses were revoked in 2019.  However, the validation we have found have been done unilaterally.  More importantly, the validation has not taken into account the performance or otherwise of the investments made by the Fund Managers.  The same actors have rushed to appoint lawyers who are railroading Fund Management Companies in the courts to seek liquidations without ascertaining the investment portfolios of the Companies.  The same mistakes made by the Bank of Ghana and its Receivers such as Mr. Nipah we understand are being made here.

In Part II of our report, we are going to present what is happening in the judiciary system without regard to the legal rights of former Fund Management companies and the realities of real and present state of values of customer funds.  We will attempt to answer the question about what seems to be behind the rush to liquidate Gold Coast Fund Management Company Limited without following SEC’s own regulations.  We will also write about where the customers’ funds are and perhaps why the Deputy Director General of SEC Mr. Ababio said publicly on radio that SEC “…is not a debt collector”.  We will uncover the real truth behind the publicly stated decision to exclude the customers of Gold Coast Fund Management from government sponsored and Parliament approved program to return investment funds until that company is liquidated.

One thought on “THE DESTRUCTION OF GHANA’S INVESTMENT SECTOR”