Spouses of Our Pastors (1) 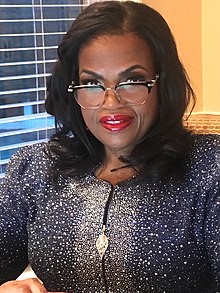 Whitaker appears frequently on the public speaking circuit and has lectured at the Massachusetts Institute of Technology and the National Defense University. She is a guest columnist for AllAfrica.com and has had opinion pieces published in a variety of publications including the Wall Street Journa and The Hill.She is a widely sought-after expert on business, trade and investment in Africa in a variety of venues and has been a guest on broadcasts on ABC News, CNN, the BBC and Bloomberg

As the first ever Assistant US Trade Representative for Africa, Whitaker served in the administrations of Presidents William J. Clinton and George W. Bush and played a leading role in the development, passage, implementation and extension of the African Growth and Opportunity Act. AGOA grants virtually all African products duty-free access to the US market and continues to be the cornerstone of US economic engagement with Africa.

Whitaker is a Vice Chair of the executive board of Mercy Ships, a global faith-based charity operating the world’s largest private hospital ship providing medical care to the poorest of the poor in Africa. She also serves as Vice Chair of US Board of Invest Africa and is a member of the Bloomberg Breakaway Network. Previously, Ms. Whitaker served on the Board of the Center for International Private Enterprise (CIPE), an organization working to strengthen democracy around the world through private enterprise and market-oriented reform; she also served as Vice Chair of the US-South Africa Business Council.

Ciara Antwi Obofowaa  is the wife , Rev Obofour, one of the most populous Pastors in Ghana. Ciara recently celebrated her tenth marriage anniversary. She even released a beautiful love story in the form of a video to commemorate a great decade of marriage to Rev Obofour.

The couple tied the knot ten years ago on August 29. She took to Instagram to share lovely images of their journey and posted a touching story about their marriage.

The previous year, during their ninth marriage anniversary, Ciara Antwi Instagram was flooded with throwback photos of their wedding. She also wrote an amazing post reiterating that numerous things have altered since they married, but her husband has been the same.

Ciara Antwi recently turned 33 years old as her husband shared a lovely birthday message that sparked great conversations in the public domain. She was born on September 2, 1987. As expected, the pastor’s wife celebrated the great day by posting a photo of herself posing beside a luxurious Rolls Royce.

Ciara Antwi expanded her family by giving birth to triplets, two boys and a girl. Ciara and Rev Obofour already have two children, a girl and a boy. One of Rev Obofour’s close friends, Ayisha Modi disclosed that the pastor had prophesied that her wife would deliver triplets months before giving birth. I

mmediately after giving birth, Ciara shared images of her beautiful baby bump that she had previously chosen to conceal to the public.

In the naming ceremony of the Obofowaa triplets, the couple displayed real cash that clearly showed their immense wealth. The plush naming ceremony happened on September 20 at their residence in Accra. The couple named the triplets Jeremie, Jesse, and Jeremiah Antwi.

Ciara has always been a woman of curves to the disappointment of critics that always look forward to some dirt on the pastor’s wife. She mentioned the following inspirational words on her Instagram.

The couple has been enstooled the Aboafuohene and Aboafuohemaa (helping chief and queen) at Tepa in the Ashanti Region of Ghana. They were given this title by the Paramount Chief of Tepa, Nana Adusei Atwenewa Ampem I in Tepa, the capital of Ahafo Ano North District. In the conferment ceremony, the couple wore authentic Kente with a touch of royal regalia, making them look amazing and wealthy. Indeed, Ciara Antwi Bofowaa is a popular personality in Ghana. Her marriage to Ghanaian Reverend Obofour’s wife puts her in the limelight.

People often say that behind every successful man is a woman, and we can as well relate it to this case because Mensah Otabil never fails to give his dear wife, Lady Joy Otabil, accolades.

Oftentimes, he has spoken of how hardworking and supportive his wife is, and that is the secret behind their successful marriage.

She has played roles that have added up to the great success of the ministry of this exceptional man of God.

She is the real link to the illustrious career of the man of God.

She is a hardworking woman who has helped her husband in great measures to become what he is today.

Lady Joy Otabil and her husband got married in the year 1986.

Joy Otabil and her husband are blessed with four children namely; Sompa, Nhyira, Baaba Aseda, and the only son, Yoofi.

Mama Vivi as she is affectionately called, is a teacher by profession and a graduate of the Word Miracle Ministerial Bible College Ghana, and Theological International Seminary USA’s affiliate branch in Ghana and a graduate of Birbeck University, London.

Rev. (Mrs) Agyinasare is also a Minister of the Gospel and currently presides over the Franco-phone Service; a French constituent branch of Perez Chapel International.

Mama Vivi is the founder of Women of Faith formerly called Miracle Ladies (The Women’s Ministry) of the Perez Chapel International.

She has travelled extensively across many nations of the world with her Husband and Partner in ministry Bishop Charles Agyinasare preaching the Gospel and bringing God’s Miracle Healing Power to many hurting and oppressed people. Under her Husband’s support and oversight, She has seen God move in unprecedented ways in Her own ministry by miracles, signs and wonders.

One thought on “Spouses of Our Pastors (1)”