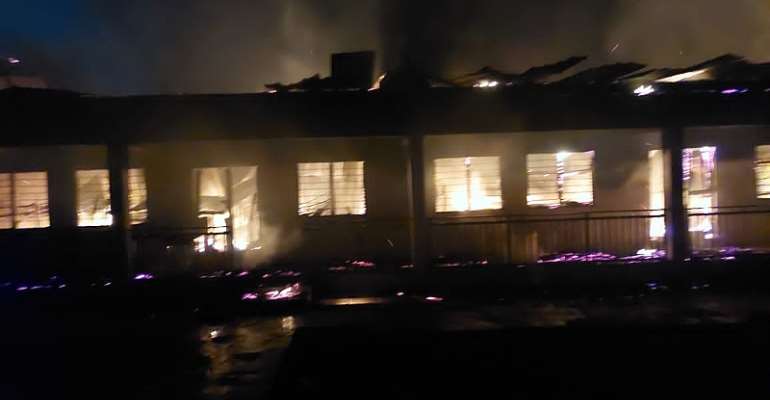 Some final year students of  Nyinahin Catholic  Senior Secondary School (SHS)  are  alleged to  have set the boys’ dormitory on  fire, destroying everything.

Some of the school’s structures were  also razed by fire in what many believed was an action by some final-year students after their final exam.

Today gathered that the students were angry with the  school authorities who refused to allow them to cheat in the just-ended West Africa Secondary School Certificate Examination (WASSCE) hence the  decision to  burn the school.

According  to authorities of the Nyinahin SHS, they received intelligence that, some final year students were planning to set some school structures on fire , and as a result, a police team was deployed to the school on Thursday night to prevent any possible action.

The police team they said, was expected to be present on the school’s premises again on Friday ,October  8,2021 at 7.00 pm, but the fire incident occurred at 6:30pm even before they arrived.

Meanwhile the Chief of Nyinahin, Nana Amampine Twum Boateng II, wants the law to deal severely with any final year student who is found culpable in the suspected arson

The Chief, after assessing the situation told journalists that he wanted all persons involved to be severely dealt with if they were found culpable after investigations.

“How can you rely on leaked questions to pass your exams? Teachers are paid to teach and you as students have to revise your notes and do all that you need to do to pass the exams. You don’t say because you are not happy with the exams you have to take the law into your own hands. There are laws in the society that govern us. We need to get to the roots of this and those who are found culpable must be severely punished,” he said.

Meanwhile, the Parent Teacher Association, (PTA) of the school has called on the government to as a matter of urgency support the about 120 first and second year students who have been displaced, as a result of the incident.