She Show – Ahomka FM: Runner-up of the 2021 Liz Hughes Award for Her Farm Radio 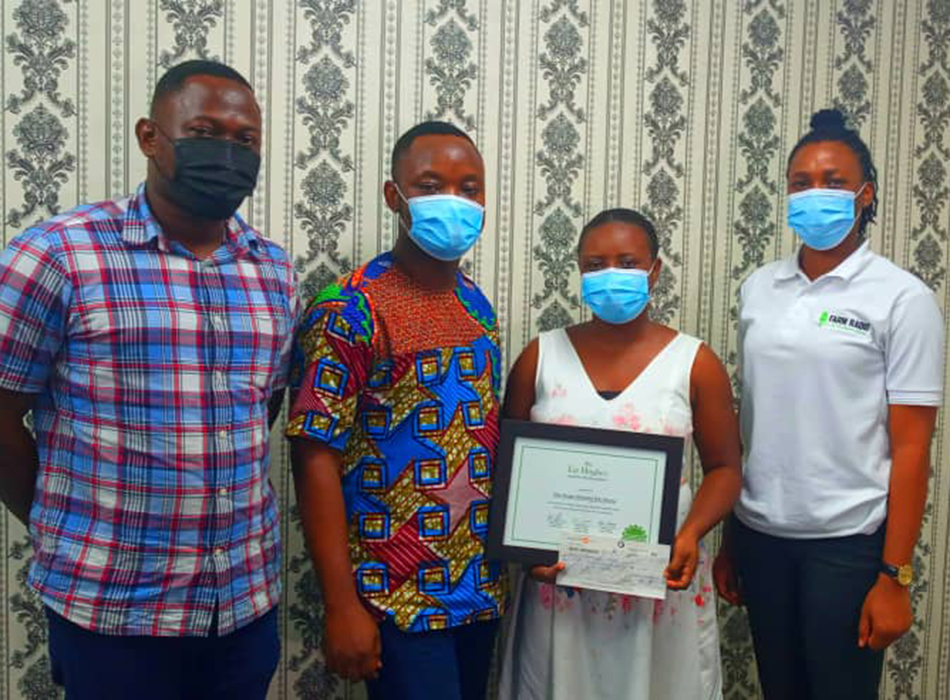 The She Show, as its name indicates, is dedicated to women. The program airs on Ahomka FM in the Elmina/Central Region of Ghana, and is produced by host Consuella Kabutey-Ongor, producer Judith Eduam, director Josephine Araba Annan-Fynn, and executive producer Samuel Nana Effah Obeng.

The She Show is one of two runners-up for the Liz Hughes Award for Her Farm Radio for 2021. The award recognizes radio stations and producers who are dedicated to serving women listeners. These programs address and advance gender equality. They may share the experiences and opinions of women, or address issues of concern to women. Farm Radio International developed this award in memory of board member Liz Hughes.

The She Show covers a wide range of issues related to women, from their relationships with their children and husbands to financial issues. It also discusses sex and health, including women’s sex lives.

One of the special things about the She Show is that the programming has a lighthearted, friendly tone, even when the subjects discussed are serious. Nana Effah says this approach is important.

“We realized that our target audience, the people who we serve, are people who have gone through a lot of challenges. A lot of the women who we are targeting are already stressed out. We intended to make the show very flexible, such that it would be very approachable, it would be entertaining. They should be always wanting to listen in to the program and also want to contribute.”

The She Show is a great example of a radio program that highlights and advances gender equality. In order to produce the She Show program to meet their gender equality objectives, the producer, who is female, selects the most appropriate topics for discussion, taking into consideration the sensitivity of the issue and the period and season during which the program will be aired. Then, the producer checks with established contacts to see if they are available to appear as guests to discuss the issues. This strategy prioritizes women’s voices on every episode.

The production team includes many women, but the She Show also works closely with an established women’s organization known as WilDar to ensure that gender inclusion, diversity, and collaboration is the foundation of their production.

“We have always talked about how women in our societies should be empowered and how women need to be independent and confident.” says Nana Effah.

The She Show has challenged conventional gender roles in Ghana and Africa by airing discussions about women and men in non-traditional roles. The program team hopes that their programming promotes the many and diverse roles that women can hold. They also hope to make progress towards gender equality by discussing women’s rights in societies and their integral role in decision-making, and by advocating for and encouraging women to take leadership and entrepreneurial positions in areas such as bead-making and running millineries.

“We believe that when women are well-employed and independent, they gain a certain form of respect and recognition and by so doing, they are heard,” says Nana Effah.

Through the She Show, young girls have been comfortable coming forward and sharing their experiences on parenting and other related subjects. Many call the program hotlines to offer feedback and their opinions on the topics of the show. Others have felt inspired to provide free training to women and girls in order to better their living conditions.

Nana Effah says he is proud that his station is receiving an award recognizing the program team’s efforts.

“This award is beautiful. It’s exciting. This is the first time we are being recognized for such an effort.”

He adds that it has not always been easy to produce a program that addresses gender issues.

He explains: “We tried doing some gender-related programs earlier on, but after running for a while, and getting all the attacks and everything, we had nothing and it was a little discouraging. So this award is giving us the facelift; it is an international award, not a very local award, so we have bragging rights. We are proud, and we are going to make noise out of it. We know that it also makes us stand on top of the game when it comes to recognition, so now people would know that when it comes to gender-related issues, the best radio station to listen to for quality information is Ahomka FM, and that alone is a blast to us!”