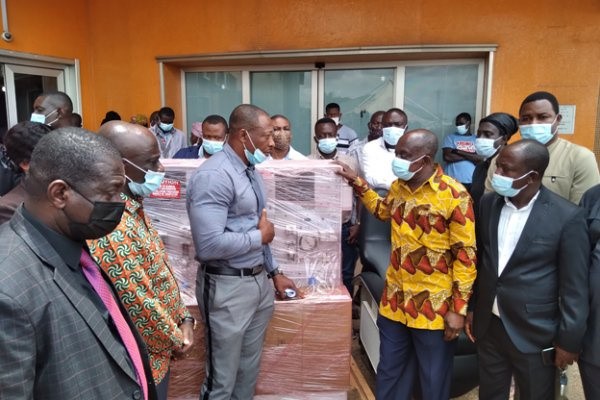 The items, valued at US$ 60,000, included 10 dialysis chairs and two dialysis machines.

Chief Executive of the Komfo Anokye Teaching Hospital, Dr. Oheneba Owusu-Danso described the gesture as timely, saying the equipment will augment the hospital’s efforts at providing efficient health care services, more specifically, the treatment of haemodialysis cases at the Hospital.

Health officials have confirmed that a sizeable number of people die annually from kidney failure in the Ashanti region.

This year for instance, seven out of the ten children who were diagnosed with the condition at the Komfo Anokye Teaching Hospital have died.

These deaths have been attributed to the lack of dialysis machines in the region making it difficult for the hospital to handle kidney problems.

The donation by Sankofa Medical Charities is therefore a major intervention geared towards reducing kidney related mortalities in the region.

The organization had already supported other hospitals in under-served regions with materials such as hospital beds, ultrasound machines, dialysis machines and computers.

It has also been providing capacity building support to health personnel in the areas of health sciences, chronic diseases such as hypertension, kidney and diabetes prevention.

Secretary of Sankofa Medical Charities, Dr. Al-Majid Adams who presented the equipment said his outfit was dedicated to fostering partnerships with other organizations to help provide medical support to health facilities in deprived communities.