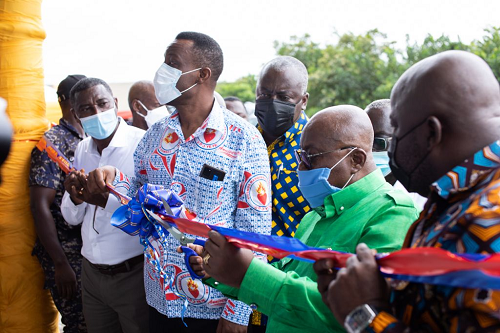 The factory, which is a 100% Ghanaian owned company, has the capacity to process 20 tons of rubber per day for export to countries such as Turkey, Malaysia, and Hong Kong. It is expected that a total of 6,240 tons of processed rubber per year will be exported, which will generate some $9.6 million of foreign exchange into the country.

Commissioning the factory, on Friday September 3, 2021 at the commencement of his 2-day tour of the Western Region, President Akufo-Addo said that the total investment for the factory was $2.1 million, with GCB Bank providing a $1.38 million loan facility to the company, under the 1D1F initiative being implemented by the Ministry of Trade and Industry.

In addition, the factory has enjoyed import duty exemptions on the plant, equipment, and machinery from government which among other incentives, have been designed to boost the competitiveness of the companies operating under the 1D1F programme.

The factory, whose construction began on 10th February 2020, currently offers direct and indirect employment to over 1,340 employees, including out-growers, latex harvesters, farm maintenance workers and transporters.

The President noted that, the siting of the factory in the Western Region would  encourage more Ghanaians to cultivate natural rubber in the catchment area, as well as other neighbouring regions to feed the state-of-the-art factory.

With Ghana’s emerging automobile industry, he was confident that the factory would  play a critical role in developing component parts for the auto industry, such as vehicle tyres, car seats and fan belts, which could be produced from the raw materials currently being manufactured from Narubiz Rubber Factor

President Akufo-Addo commended the Business Promoters and Traditional Authorities of the area for their unflinching support for the project and GCB Bank for providing the loan facility for the establishment of the factory.