Rishi Sunak wants all pupils to study maths to age 18 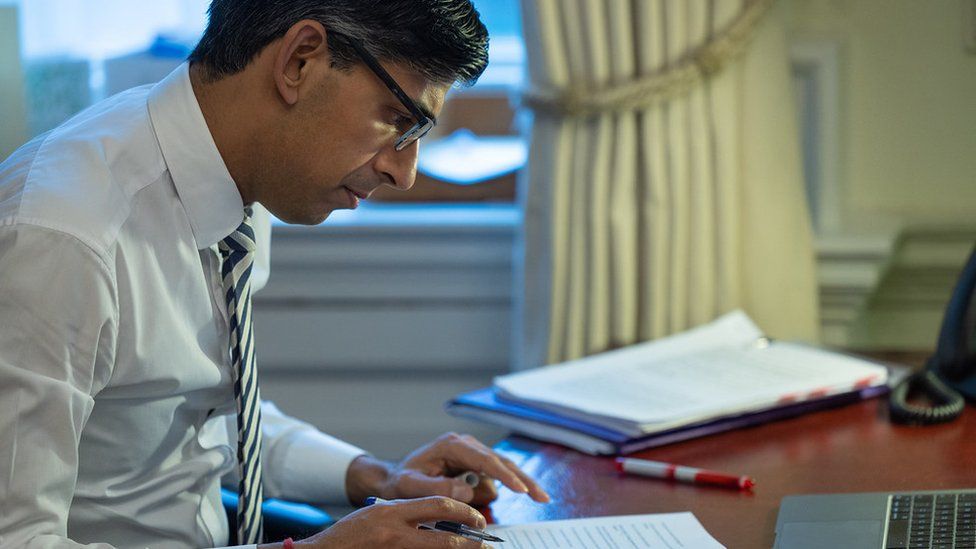 The prime minister is looking at plans to ensure all pupils in England study maths in some form until the age of 18.

In his first speech of 2023, Rishi Sunak will also set out the priorities for his premiership, including tackling backlogs in the health service.

The government is facing a wave of strikes, a cost-of-living crisis and huge pressures on the NHS.

Mr Sunak will be keen to use his speech to prove competence and set out ideas after last year’s political turmoil.

During his speech, Mr Sunak is expected to expand on his vision for the UK, and revisit comments made in December about giving people “peace of mind”.

The Daily Mail reports that Mr Sunak will take “personal charge of tackling the NHS crisis”.

Problems getting an ambulance, waiting times for planned operations and social care in England are all likely to be referred to in his speech later, as critics demand immediate answers to what is widely seen as a crisis in the NHS this winter.

Those around Mr Sunak say his instinct is that to have more than a few priorities at any one time is to have no priorities at all, and the situation in the NHS is uppermost in his mind, according to BBC political editor Chris Mason.

On Tuesday, No 10 said the government was “confident” it was “providing the NHS with the funding it needs”.

But opposition parties have accused the prime minister of being “missing in action”, as senior doctors warn some accident and emergency units are in a “complete state of crisis”.

With the Conservatives trailing in the polls, Mr Sunak will also be keen to set out the aims of his premiership beyond crisis management.

In lines briefed to journalists ahead of the speech, Mr Sunak is expected to say the UK must “reimagine our approach to numeracy”.

“In a world where data is everywhere and statistics underpin every job, our children’s jobs will require more analytical skills than ever before,” he will say.

Just half of 16 to 19-year-olds study maths, according to Mr Sunak – but this figure includes pupils doing science courses and those who are already doing compulsory GCSE resits in college.

It is not clear what the plans will mean for students who wish to study humanities or creative arts qualifications, including BTecs and no new qualifications are immediately planned and there are no plans to make A-levels compulsory.

The government is instead exploring expanding existing qualifications as well as “more innovative options”, a Downing Street spokesperson said.

The idea appears to be an aspiration rather than a fully developed policy, with the precise mechanics for how it would work not set out.

The government acknowledges it would not be possible to implement before the next general election, although the prime minister is expected to begin working on the plan in this parliament.

The Autumn Statement unveiled an extra £2.3bn in core school funding for five to 16-year-olds over the next two years – reversing the real terms cuts of the last decade.

However, no extra funding was given to further education colleges, which teach many of the most disadvantaged 16 to 18-year-olds, nor to sixth form colleges.

The Association of School and College Leaders said there was a “chronic national shortage of maths teachers”.

And Labour’s shadow education secretary Bridget Phillipson called on Mr Sunak to “show his working” on how greater participation in maths will be funded.

“He cannot deliver this reheated, empty pledge without more maths teachers, yet the government has missed their target for new maths teachers year after year,” she said.

Liberal Democrat education spokesperson, Munira Wilson, called the aim “an admission of failure from the prime minister on behalf of a Conservative government that has neglected our children’s education so badly”.

“Too many children are being left behind when it comes to maths, and that happens well before they reach 16,” she added.

Tory MP Robin Walker, who is chair of the education committee, urged the prime minister to focus on childcare.

“It’s great to hear the prime minister today committing to maths beyond 16,” he told BBC Radio 4’s Today programme. “But if we don’t get the right approach to stimulating and supporting children early on, they won’t have the opportunities to thrive in the school system.”

Mr Sunak will also use Wednesday’s speech to outline his agenda for the coming months.

He became prime minister towards the end of a turbulent political year which saw his two predecessors – Boris Johnson and Liz Truss – brought down by Conservative backbenchers.

Mr Sunak faces the challenge of keeping his own MPs happy, while dealing with the rising cost of living and strikes in several sectors, including nursing and the rail industry.

In his new year message, he said “I’m not going to pretend that all our problems will go away in the new year”, but added that “the very best of Britain” would be on display as it continues to support Ukraine in its fight against Russia.