Pope Benedict XVI: Lying in state at the Vatican begins 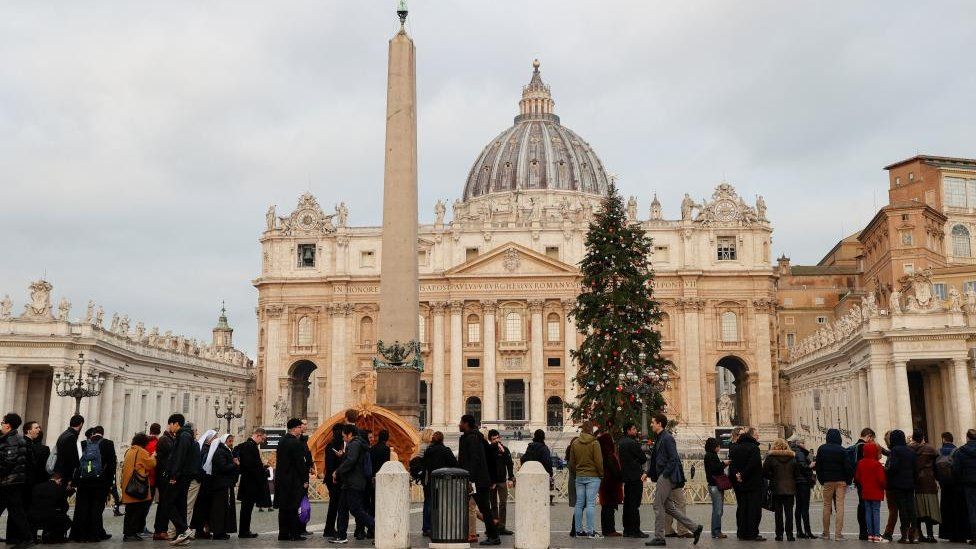 Tens of thousands of people are expected to pay their respects to former Pope Benedict XVI when his lying in state begins at the Vatican later.

He died on New Year’s Eve at the age of 95, almost a decade after he stood down because of ill health.

Pope Francis will preside over Thursday’s funeral – the first time a Pope will be buried by his successor.

As dawn broke over the Vatican, a queue was already forming at the edge of St Peter’s Square.

At the very front was Father Alfredo Elnar, 30, from the Philippines. He said he had studied and admired the theological writings of the former pontiff, and spoke of an emptiness since his death.

A little further back, Sister Marianna Patricevic, a nun from Croatia, talked of how grateful she was for all the late pope had done – saying there was not a subject she studied at university where they did not discuss his views.

Father Richard Kunst, visiting from the US, said when he passes the Pope’s body, he would pray for him – but also for a miracle to help a friend at home who is dying of cancer.

His body will be displayed for three days in an open casket at St Peter’s Basilica, with people allowed to pay their respects until 7pm each evening.

The funeral will take place in St Peter’s Square, before the Pope Emeritus is laid to rest in the tombs beneath the Basilica.

The Vatican released pictures of the body on Sunday, dressed in red papal mourning robes and wearing a gold-trimmed mitre.

Tributes have poured in from around the world, and the funeral is expected to draw crowds of thousands.

The last papal funeral, that of Pope John Paul II in 2005, was one of the largest Christian gatherings in history, and drew an estimated four million people to Rome.

Details of the guest list have not been released, but the Vatican has said that it will include delegations from Italy and Benedict’s native Germany.

Pope Francis paid tribute to his “dearest” predecessor after his death.

US President Joe Biden lauded the former Pope’s “lifetime of devotion to the Church”, while Italian Prime Minister Giorgia Meloni hailed him as “a great man whom history will not forget”.

In Brazil – the largest Catholic nation in the world – incoming President Luiz Inácio Lula da Silva said he wished “comfort to the faithful and admirers of the Holy Father”.

Pope Benedict was a controversial figure, and some have criticised him for failing to tackle allegations of clerical sexual abuse.