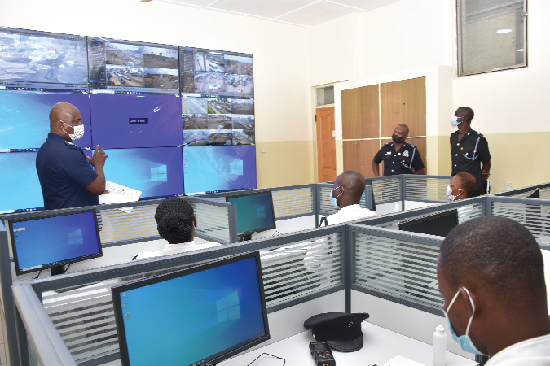 Is it the issue that the acting Inspector General of Police, COP Dr. Akufo Dampare is that pro-active, or that his implementation policies have already been drawn up even before he assumed his new position?

This is the multi-million question agitating the minds of many Ghanaians. Before he assumed the helm of the Ghana Police Service, two other top personal of the Service had served in that capacity, albeit, permanently.

These were Mr. Asante Appeatu and Mr. Oppong Boanuh. Although the two were credited with some degree of reforms in the Police Service, that being pursued by Dr. Dampare, have so far hit the nerve centre of police operations.

For once in the history of the Police Service, horses have been deployed, especially, in the night to combat crime. He has also declared war on armed robbery and serial killings; which before his appointment, had hit a crescendo.

He personally got involved with the police operation team that uncovered the culprit in the Abesim gruesome murder case. It’s one sad issue where one Richard Appiah  had been murdering persons, some of who included his own family people.

The police are still investigating the serial murderer. Now, the Motor Transport and Traffic Directorate (MTTD) of the Ghana Police Service has installed some 3000 intelligence video recording and surveillance cameras at major intersections in the country.

Other strategic locations of the camera surveillance include government installations in the capital, and in other cities and towns. The thrust of the operation is to enable the Police Service monitor and capture motorists who drive recklessly.

It’s the hope of the police administration that the move will help crack down on dangerous driving and other acts of indiscipline on our roads.

By the new directive, road users who may think there are no physical presence of police officers on the road, and would therefore decide to ignore road traffic regulations, will still be captured by the specialized security cameras, tracked and processed for court.

Monitoring Officer Constable Afrifa Emmanuel Odei, disclosed that the Centre will be working the full 24-hour day, explaining “when I sit behind my computer, I can monitor many areas in a particular region on my split-screen”.

He added, “there is a feature to enable me to rotate the areas I watch, and for instance, when I see a video of a vehicle that has parked at an authorized place, I zoom in to get a video of the area, zoom in further to capture the vehicle, then I take a picture of it.”

He further explained, “there is software embedded in the camera called automatic number plate registration which we send to our officers who take it from there.”

The Centre is working with the Driver and Vehicle Licensing Authority (DVLA) and police personnel to get details of the vehicles captured by the system, where owners the vehicles will be contacted and shown evidence of their wrong actions, after which, they will be prosecuted.

In the opinion of the Supervisor at the Centre, Chief Superintendent Joseph Zanu, the process will help “reduce carnage on our roads”.

“The cameras have special security features which track you, where ever you are because the intelligent video surveillance cameras capture almost every major road network in the country,” he disclosed.

Commissioner in charge of Police Administration, Superintendent Dr. Samuel Sasu Mensah, noted: “Though the police are not out to get offenders, motorists should be vigilant because when they are caught, they will not be spared.”

He further added, “you don’t need to see the physical presence of the police on the road before you obey traffic rules and regulations. So we are complementing the efforts of the police with this system.”

The Director General of the MTTD, DCOP, Francis Aboagye Nyarko gave an assurance that the “video surveillance cameras will be well maintained to work effectively”.

The MTTD boss alluded that the system ‘’is going to help us clear traffic offenders who have decided not to comply with the road traffic act; and also send a warning to drivers that this time when they are caught, they have no defence, we have the evidence.’’