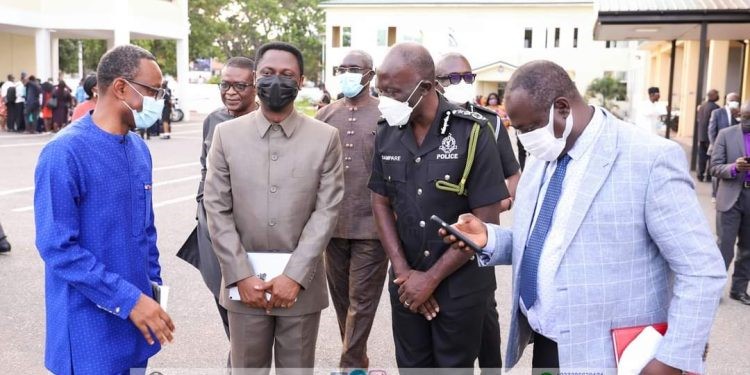 The Ghana Police Service has urged religious leaders to be mindful of Ghana’s laws while expressing their faith and other religious beliefs to ensure peaceful co-existence in the country.

The Service gave this caution in a statement after a meeting with religious leaders and faith-based organizations on Monday, October 25, 2021.

The meeting, which was called at the behest of the Inspector-General of Police, Dr. George Akuffo Dampare, was aimed at highlighting the rights and limitations of the religious community within the confines of the law.

It helped the security agencies and the leaders of the faith-based institutions to deliberate on the topic: “Religion and the Law”.

“Issues discussed at the forum include the provisions of the Constitution relating to freedom of religion, the church/mosques as a corporate entity, criminal offences that may be committed by religious bodies or their appointees, and possible human rights abuses. Other issues discussed were spirituality and requirements of evidence as required by the court, religious doctrines that contravene provisions of the Constitution, and the general enforcement of the law,” the statement from the police noted.

Dr. Dampare presided over the meeting, which was attended by members of the Police Management Board (POMAB), representatives of the Christian Council of Ghana, Office of the Chief Imam, Ghana Catholic Bishop Conference, Pentecostal and Charismatic Council, Council of Independent Churches, and the National Association of Christian and Charismatic Churches.

This comes after the arrest of two Ministers of the gospel in recent times who fell foul of the law.

The first was the arrest of Rev. Owusu Bempah of the Glorious Power International Ministries, and now Bishop Stephen Kwesi Appiah, popularly known as Jesus Ahuofe, who was arrested and remanded following his prophecy that dancehall artiste, Shatta Wale, would be shot on October 18, 2021.

He was charged for causing fear and panic, but pleaded not guilty and was subsequently remanded into prison custody for five days. He has however been granted bail.

There have been concerns about how, in the name of religious freedom, some pastors and self-acclaimed prophets make utterances that are deemed to be against the law.