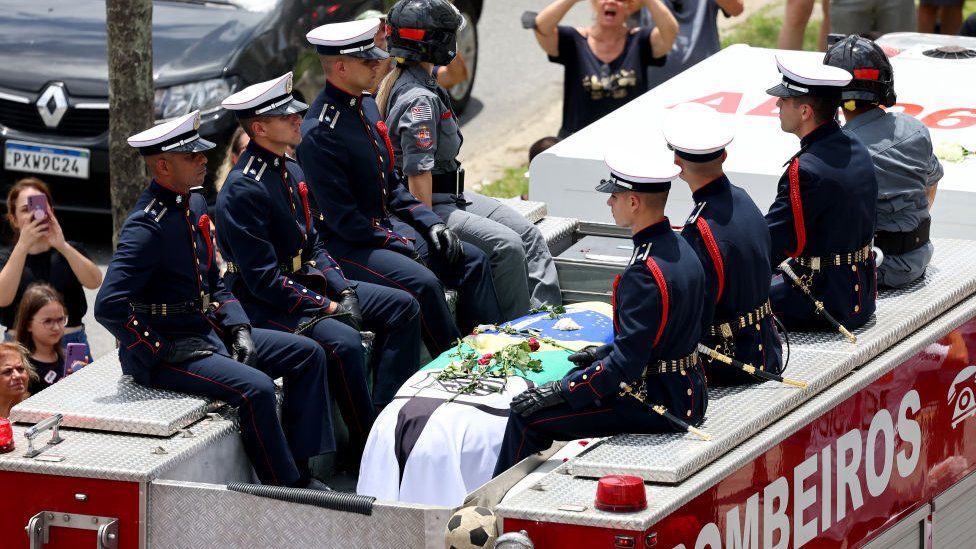 If Monday’s wake for Brazilian football legend Pele was a day of reflection, Tuesday’s funeral cortege was one of carnivalesque proportions.

The 82-year-old, who many regarded as the world’s best football player, died on 29 December.

His coffin arrived in Santos on Monday, where thousands of mourners came to pay their respects at the ground of his former club – some even queued overnight.

On Tuesday, supporters’ club Torcida Jovem gathered outside the Urbano Caldeira stadium ahead of the casket leaving. Fans waved huge black and white banners, the colours of Santos Football Club. Many wore the number 10 shirt that Pele made so famous.

“Only Pele, 1,000 goals,” they repeatedly chanted as people beat drums and danced in the street.

His body was then accompanied for seven kilometres through the streets of Santos while helicopters flew overhead. His coffin was carried on a fire engine, as is traditional in official parades.

It travelled along the sea front and past Pele’s mother’s house – she turned 100 last year. There, a relative asked for a minute’s silence and the party atmosphere hushed immediately as Doña Celeste clutched her hands in prayer.

These past few days have halted the busy coastal city of Santos.

“He was important for the whole world, for young people too,” said Marcia Simões, who was standing with her sons Eduardo and Mario at the road leading to Pele’s burial place. “I’m prouder than ever to be from Santos.”

That was a feeling echoed by so many mourners – that he was the best of Brazil.

“Everyone in Brazil wants to be a football player to imitate him,” said Thiago Silva, one of the last people in the queue before the wake ended. “Of course, nobody can.”

“My father was a Pele fanatic,” said Sandra Garcia, who was with 11-year-old Enzo. “I got really emotional remembering my father – if he was alive, no question he would have been here crying. I grew up praising Pele, talking of him and telling stories about him – so it’s important to be here.”

Even for someone of Enzo’s young age, Pele was a powerful influence.

“No question, he beats Cristiano Ronaldo by a long way,” he said. “He’s the best player of all time over several decades.”

Beyond football, Pele united Brazilians by being their ambassador. In a country deeply divided politically and economically – people have only had good things to say about him.

The same could not be said of the country’s new president, Luiz Inácio Lula da Silva, who only this week took office for a third term. He arrived to pay his respects shortly before the wake ended and cheers for him competed with calls that he should be in prison.

President Lula was released in 2019 after spending 18 months in jail for corruption. His convictions were annulled in 2021.

The coming together of a nation in grief has been a welcome relief for so many in what has been a turbulent few months since the presidential elections.

“Pele united all of us,” said Deofilo de Freitas, waiting in the queue. He was the first one in the line on Monday but wanted another chance to see his idol before he was laid to rest. “Not only was he the best player in the world, he was a marvellous human being.”