Pele: A sporting icon who made football beautiful 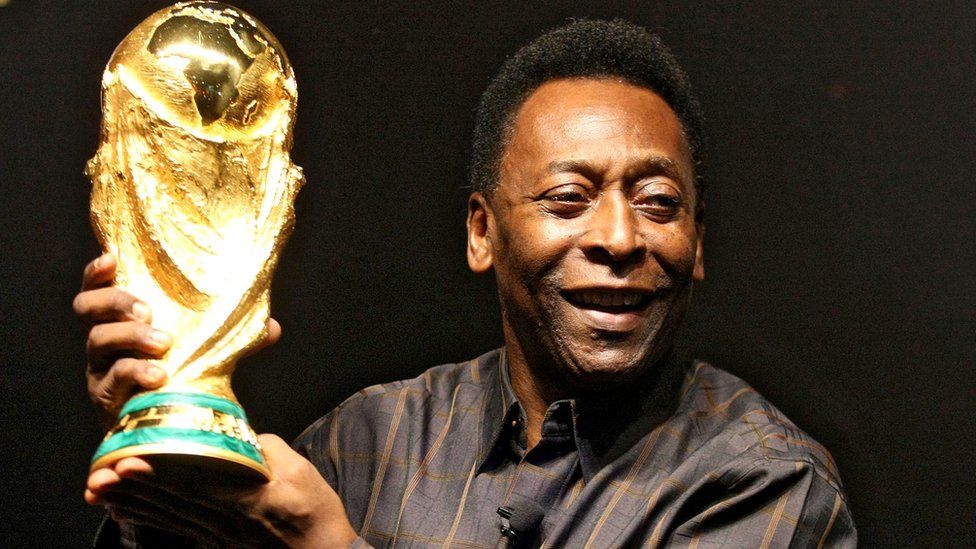 Bobby Charlton said that football might have been “invented for him”.

Certainly, most commentators regard him as the finest exponent of the beautiful game.

Pele’s skill and electrifying speed were coupled with a deadly accuracy in front of goal.

A national hero in his native Brazil, he became a global sporting icon.

And, off the field, he campaigned tirelessly to improve conditions for the most deprived people in society.

Edson Arantes do Nascimento was born on 23 October 1940 in Tres Coracoes, a city in south-eastern Brazil.

His birth certificate states he was born on 21 October, but Pele insisted that was incorrect: “In Brazil we’re not so fussy about accuracy.”

He was named after the inventor, Thomas Alva Edison, because, according to Pele, electricity arrived at his home just before he did.

Later his parents dropped the “i” from his name.

He grew up in relative poverty in the city of Bauru, and contributed to the family income by getting part-time jobs in local cafes.

His father taught him to play football, but the family could not afford a ball – so the young Pele often kicked a rolled-up sock around the street.

It was at school that he was first dubbed Pele by his friends, although neither he, nor any of them, have any idea what it means.

He never much liked the nickname, feeling that it sounded too much like “baby talk” in Portuguese.

He began playing for a number of local amateur teams when he was in his teens.

Indoor football had just started to become popular in the area, and the young Pele relished the change of playing surface.

“I took to it like a fish to water,” he later said. “It’s a lot quicker than football on grass – you have to think really quickly.”

In 1956, his coach, Waldemar de Brito, took him to the port city of Santos to try out for Santos FC, a professional team.

De Brito was already convinced of his protégé’s abilities, boasting to the Santos directors that Pele would be the best footballer in the world.

Pele more than lived up to the boast, impressing Santos who offered him a contract in June 1956. He was just 15 years old.

A year later, he was selected for the Santos senior team and scored the first of his many career goals in his opening match.

He quickly earned a starting place in the side and in his first year became the league’s top scorer.

Just 10 months after signing as a professional, Pele was called up by the Brazilian national team.

He made his international debut against Argentina at the Maracana, where Brazil lost 2-1.

Their goal was scored by a 16-year-old Pele, making him the youngest player to score in an international.

His hopes of playing for Brazil in the 1958 World Cup seemed to have been dashed when he suffered a knee injury.

But his team-mates pressured the management to select him and he made his World Cup debut against the USSR.

Inevitably, he became the youngest player to score a World Cup goal, putting one past Wales in the quarter-finals.

In the semi-final, Brazil were leading 2-1 against France when Pele scored a second-half hat-trick to put the match beyond doubt.

It seemed he could do no wrong as he stroked two goals past Sweden in the final, as Brazil won 5-2.

Back in Brazil, Pele helped Santos win Sao Paulo’s top league competition in 1958, and he finished the season as top scorer.

In 1962, there was a famous win against European champions Benfica.

Pele’s hat-trick in Lisbon sank the Portuguese side and earned the respect of their goalkeeper Costa Pereira.

“I arrived hoping to stop a great man,” he said. “But I went away convinced I had been undone by someone who was not born on the same planet as the rest of us.”

There was to be disappointment in the 1962 World Cup, however, when an injury in an early game sidelined Pele for the rest of the tournament.

That did not stop a rush of wealthy clubs, including Manchester United and Real Madrid, trying to sign the man who was already touted as the greatest footballer in the world.

Alarmed at the thought of their star going overseas, the Brazilian government declared him a “national treasure” to prevent him being transferred.

The 1966 World Cup was a huge disappointment for Pele and Brazil. Pele became a target and suffered considerable fouling, particularly in the games against Portugal and Bulgaria.

Brazil failed to progress beyond the first round, and Pele’s injuries from the tackles he had endured meant he could not play at his best.

Back home, Santos were in decline and Pele began to make less of a contribution to his side.

In 1969, Pele was approaching 30, and reluctant to commit himself to playing for Brazil in the 1970 World Cup in Mexico.

He had also had to suffer an investigation by his country’s military dictatorship who suspected him of left-wing sympathies.

In the end, he scored four goals in what was to be his last appearance at a World Cup, as part of a Brazilian side considered to be the greatest team in history.

The most famous moment came in the group game against England. His header seemed destined for the net until Gordon Banks pulled off “the save of the century”.

Despite this, Brazil’s 4-1 victory over Italy in the final secured them the Jules Rimet trophy in perpetuity for winning it three times. Pele, of course, had scored.

His last match for Brazil came on 18 July 1971 against Yugoslavia in Rio, and he retired from Brazilian club football in 1974.

Two years later he signed for the New York Cosmos. While past his best, his name alone significantly raised the profile of football in the United States.

In 1977, Pele’s old club Santos took on Cosmos in a sell-out game to mark his retirement. He played one half with each side.

Already one of the most highly paid sportsmen in the world, Pele continued to be a money-making machine after his retirement.

He dabbled in acting, appearing alongside Sylvester Stallone and Michael Caine in the 1981 film, Escape to Victory.

He had a number of sponsorship deals and endorsements, his name still having a huge resonance across the world.

In 1992, he was appointed a UN ambassador for ecology and the environment, and was later made a Unesco goodwill ambassador.

Five years later, he was made an honorary Knight Commander of the British Empire in a ceremony at Buckingham Palace.

After being appointed Sports Minister by Brazilian President Fernando Henrique Cardoso in 1995, Pele took a leading role in attempts to end corruption in Brazilian football. Pele’s Law – passed in 1998 – was credited with modernising the sport’s governance in the country.

But he quit his Unesco role after himself being accused of corrupt practices, although no proof was found.

And he played a major part in Rio de Janeiro’s successful bid for the 2016 Olympics, appearing at the closing session of the 2012 London Games for the handover to Rio.

In 2005, he received a lifetime achievement award at the BBC’s Sports Personality of the Year event.

Pele married Rosemeri dos Reis Cholbi in 1966, and the couple had two daughters and a son. They divorced in 1982, after Pele was linked with the model and film star Xuxa.

He was married for a second time to a singer, Assiria Lemos Seixas. The couple had twins but later separated.

In 2016, he married Marcia Cibele Aoki, a Japanese-Brazilian businesswoman, whom he first met in 1980.

There were claims that other children had been born as a result of affairs, but the star steadfastly refused to acknowledge them.

In recent years, the star was frequently dogged by health problems. In September 2021 he had a tumour removed from his colon and had been receiving chemotherapy for over a year before his death.

But he tackled the challenges with typical good humour. In an Instagram post before entering hospital for the final time in November 2022, the star joked that he was checking in for his “monthly visit”.

He also thanked organisers at the Qatar World Cup, where a building was illuminated with the words: “Get Well Soon, Pele.”

Pele’s name is instantly recognised by those who have no interest in or knowledge of football.

He once even joked that there were only three truly international brands: Jesus, Coca Cola and Pele.

He was one of those rare figures who transcended his sport to become known across the world.

In later life, he struggled to overcome the effects of a hip operation: appearing in a wheelchair and often unable to walk.

But in his heyday, his sheer athleticism brought pleasure to millions; his innate talent winning him the respect of team-mates and opponents alike.

The great Hungarian striker Ferenc Puskas refused even to classify Pele as merely a player. “Pele was above that,” he said.

But it was Nelson Mandela who probably best summed up what made Pele such a star.

“To watch him play was to watch the delight of a child combined with the extraordinary grace of a man.”