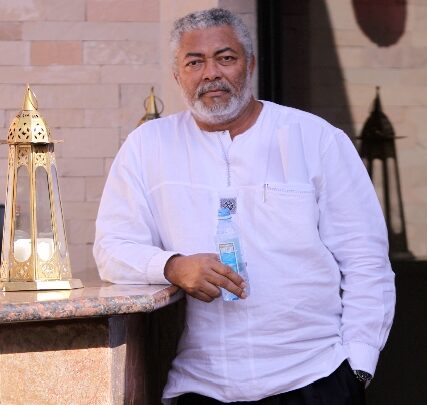 Born enigma, Rawlings withered in a manner that left many dumbfounded. His demise on November 12th, 2020 bore a semblance of his sudden burst onto the Ghanaian political scene.

So on May 15th, 1979, a certain Flight Lieutenant made the most frightening insurgency against his superior officers in an unimaginable manner.

The ruling military junta at the time— The Supreme Military Council 2, had superior officers ranked from Brigadier General to Lieutenant General; yet Rawlings would not be cowed by the frightening dispositions of the Generals in the SMC. He had an agenda; and that became the motivational force that made him move with gusto in his quest to remove the Generals from office.

Rawlings’ May 15th, mutiny was however thwarted by a group of loyal government forces, led by Major Suleimana. Notwithstanding the obvious breach of the military chain of order, Rawlings showed an incredible and stoical defence of his action; absolving any member—mainly junior officers, of his team of mutineers and shouldered every responsibility.

His all popular refrain “Leave My Men Alone, I am Responsible for Everything” at his Court Marshal, still remains an indelible imprint on Rawlings’ persona even in death. He could not bother about the death sentence that potentially, hung on his neck for staging the abortive coup. Indeed, many had anticipated that the Colonel Emmanuel Enninful-led Court Martial would have pronounced death sentence on Rawlings and his May 15th accomplices on June 4th 1979.

Ironically, it was same June 4th, 1979 that another turn of Ghana’s political history was weaved around what would later become the “Rawlings’ factor in Ghanaian politics.” Indeed, providence smiled on Rawlings and his group of mutineers on the day. Then Captain Kwadwo Boakye-Djan, led another insurrection, which many analysts believe was fueled by the popular approval of Rawlings May 15th uprising.

The successful June 4th coup thus, scripted a unique and unprecedented history of how an escapee soldier and a coup maker on a possible death row, became a head of state. Rawlings’ death on November 12th, 2020 was as shocking as his enigmatic persona that stood out through his June 15th abortive coup through to the successive ones of June 4th 1979 and December 31st 1981.

The Rawlings conundrum still persisted in his two-term civilian administration of January 7th, 1993 to January 7th 2001. Indeed, Rawlings did not show much frailty in the days leading up to his demise, although his health condition, just like any 73year-old, was not as robust as when he breezed onto the political scene at age 33.

Followers of June 4th ,1979 still recount the noble ideals of the occasion. It was successful revolt against the military cabal that had ruled the country since January 13th, 1972 and was supposed to have ended all coup d’etats in the country.

The Armed Forces Revolutionary Council (AFRC) that was set-up after the overthrow of Gen. Akufo’s SMC 2, set out a rather heart-breaking benchmark that was supposed to ward off any would be coup maker. Three former Heads of State and other senior officers were executed by firing squad. One of them, Lt. General Akwasi Amankwaah Afrifa, who had no connection with both SMC 1 and 2 was included in the executions for his role in the 1st Republican coup that ousted Dr. Kwame Nkrumah’s administration.

The killing of the officers was not only a deterrent to other serving army officers with interest in veering into partisan politics, but was meant to also instill discipline, probity and accountability into any such leadership class in the Ghanaian society. A new order, under the special “House Cleaning Exercise” embarked on by the AFRC, emerged under the brief three-months reign of the AFRC.

People who hoarded goods; and others who sold above the stipulated prices were summarily dealt with or punished in the open. Armed robbers were summarily executed. Although the instant justice approach of the AFRC, did not improve instantly the living conditions of Ghanaians, it offered hope that perhaps Ghana was on course of purging off criminals and others who looted the national kitty and fleeced the country’s resources.

…But how justifiable was June 4th & the three months AFRC reign?

Many have been questioning the essence of June 4th on the country’s political history.  This is because the event occurred at the time that Ghana was set to hand-over to a 3rd Republican civilian administration sometime in July of 1979. The only difference that the June 4th uprising did to the political calendar at the time was to push the handing over to September 24th, 1979

Handing over to Limann and 31st December

Rawlings handed over to Dr. Hilla Limann as the 3rd democratically elected President of Ghana on the stated date. Rawlings would however not allow Limann to go the full cycle of even his first four-year tenure. Some 27 months into the PNP government and the Limann administration, Rawlings seized power again in a bloodless coup and formed the Provisional National Defence Council (PNDC) which although provisional, ruled for 11 years, before transitioning into the National Democratic Congress in the 4th Republic.

The fury of Boakye Djan and others

The Second-in-Command in the AFRC junta, Major Boakye Djan together with other members of the council were so miffed at Rawlings for his unilateral decision to subvert the will of Ghanaians in the 31st December coup. That action, to the Boakye-Djan group, constituted a betrayal of trust and confidence and momentarily, soured Rawlings’ relationship with other AFRC members.

The return of Rawlings to take back political power from Limann, Boakye Djan and his allies contend, meant Rawlings had a personal agenda to pursue. And that contradicts the collective and the binding pact made by the AFRC members the that June 4 uprising, was supposed to end all military interventions in Ghana.

Ghana entered the 4th Republic on 7th of January 1993, with Rawlings being sworn-in as the 1st President of the 4th Republic. At the time that multi-party democracy was non appealing to many African Heads of State, many, including some world leaders, commended Jerry Rawlings for accepting to take Ghana into the comity of democrats.

The 4th Republic has had its own challenges; yet it has stood the test of time producing five different presidents; a sustained and improved democracy that today, we have a split parliament without a clear cut majority.

The other side of Rawlings in democracy

Rawlings had an altercation with his Vice President, Kow Nkensen Arkaah during the 1st administration of the 4th Republic. The former Vice President claimed Rawlings beat him at a cabinet meeting on 28th December, 1995. The issue worsened in the run-up to the second elections in the 4th Republic, with Rawlings’ Vice President going as the running mate of the coalesced opposition parties: The Great Alliance, led by J.A Kufuor.

Rawlings unilaterally chose his successor after his 2nd term office. He decided against all odds, picking Prof John Evans Atta Mills, his Vice President as his successor. That decision led to a secessionist group in the NDC, led by Augustus Oboadum Tanoh to form the National Reform Party (NRP) that competed in the 2000 election.

Rawlings also prevailed rather strongly and badly on Prof Atta Mills at a point during the reign of his former Vice President. Rawlings became the number one critic of Prof Mills’ administration from 2008 till the former President passed on, on 22nd July 2012. Interestingly, before his demise, Rawlings had become a stanch ally of Nana Akufo Addo, once his number one nemesis. This is the Jerry John Rawlings we are remembering. Even in death, people still struggle to analyze his character or his enigmatic persona.