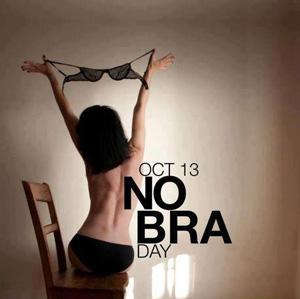 No Bra Day is an annual observance of October 13 on which women are encouraged to go braless as a means to encourage breast cancer awareness.

No Bra Day was initially observed on July 9, 2011, but  for the past three years it had moved to the 13th day of the National Breast Cancer Awareness Month, October.

Users on social media are encouraged to post using the hashtag #nobraday to promote awareness of breast cancer symptoms and to encourage gender equality.

Some users on social media sites also encourage women to post pictures of themselves not wearing a bra. Some women embrace No Bra Day as a political statement while others prefer the comfort of discarding what they view as a restrictive, uncomfortable garment.

Brown found that many Canadian women who underwent a mastectomy due to breast cancer resisted undergoing reconstructive surgery.

He founded “Breast Reconstruction Awareness” (BRA) Day to increase women’s awareness of the availability of reconstructive breast surgery. BRA day is intended to raise awareness of breast cancer screening, alert women to breast cancer symptoms, and to encourage women to conduct regular self- examinations. The event was adopted in the U.S. in 2012.

As of September 2018, the BRA Day event devoted to educating women about reconstructive surgery, and hosted by the Canadian Cancer Society, continued to be held across Canada. BRA day is observed on different dates in different provinces of Canada during the month of October.

The origin of No Bra Day can be traced back to the first BRA Day held in Toronto, in 2011. In July that year, an anonymous individual using the name Anastasia Doughnuts conceived of No Bra Day and published the first website promoting the event

Bra Day is also  a way to encourage women to enjoy being braless and to become knowledgeable about breast cancer symptoms. The day is controversial as some see it as sexualizing and exploiting women’s bodies while at the same time belittling a serious disease.

One thought on “October 13TH Annual NO BRA DAY”