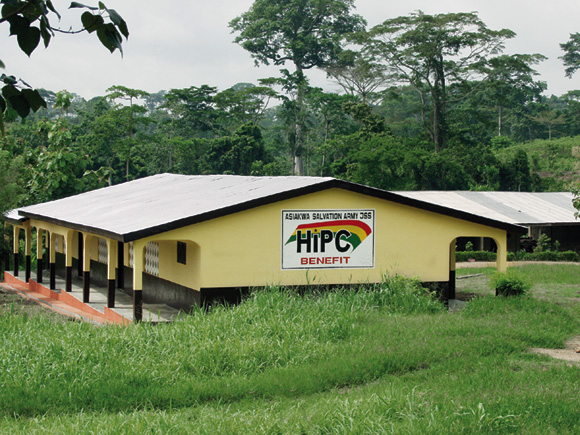 The Today Newspaper continues with its series on NPP’s Policy Triumphs with special emphasis on the benefits that the country derived from the earlier highly maligned Highly Indebted Poor Countries’ (HIPC) Initiated by the President J.A. Kufuor’s administration.

The Highly Indebted Poor Countries (HIPC) is a policy initiative launched by the Kufuor Administration to use some of the debt relief benefits to set up the Venture Capital Trust Fund (VCTF).

From its own website, the mandate of VCTF is to “Provide Financial Resources for the development and promotion of venture capital financing for Small and Medium Enterprises (SMEs) in priority sectors of the economy as shall be specified from time to time.”

Several years later, many professionals and business people do not know what it is, what it does, where its offices are and the investments that have been made so far.

What some people rather remember are news reports such as this: “Venture Capital Scandal: Duku, 2 others ordered to pay GH₵18.5m to the state. The Accra High Court has convicted a former Chief Executive Officer (CEO) of the Venture Capital Trust Fund (VCTF), Daniel Duku and two others for causing financial loss to the state.”

What then can we say have the benefits been?  One independent assessment had this to record: “The evaluation team did not find there to have been a discernible direct economic impact from GVCF’s investment activity to date, with respect to areas such as job creation, increased tax revenues and enhanced infrastructure development.

However, given that the Fund had invested a total of $1.6 million in six companies, over less than a two-year period at the time of this evaluation, a significant impact in these areas would not be expected.

Based on the Fund’s present deal pipeline, the number of projects now approved for investment that should come into the Fund’s portfolio over the next twelve months, and the fact that approximately 50% of the projected dollars to be invested would go into start-up companies, appreciable direct economic impact should be discernible over the next five years.

The VCTF gave birth to GAIN— “The Ghana Angel Investor Network (GAIN)”; an innovation of the Venture Capital Trust Fund designed to help ease access to capital for early stage-by-stage entrepreneurs within Ghana. GAIN was launched by the successive NDC administration by the Honourable Minister of Trade and Industry, Madam Hannah Tetteh on 6th September, 2011.”

The jury, it appears is that the VCTF, although a laudable idea, has suffered from management deficiencies and less than diligent supervision. The VCTF was instrumental in creating the Ghana Alternative Market (GAX), an alternate listing on Ghana’s stock market, specifically for SMEs, scheduled to open in 2013 to offer a more accessible option for SMEs to attract investment.

Also, it has been documented that, “By 2012, the VCTF raised a total of US$ 58.2 million, but it begs the question how sustainable the fund is. As of later 2013, the five venture capital finance companies have invested more than US$ 17 million into 48 SMEs across various sectors of the Ghanaian economy, including in healthcare, education and agro-processing enterprises producing items such as inexpensive packaged foods and filtered water.

These SMEs provide more than 1,000 direct jobs and an estimated 3,000 indirect jobs through the expanded operations of portfolio companies.”  Today intends to follow up on this to determine who these SMEs are and how successful they have been.

From the records: “The airline was set up in 2004 as a partnership between the government of Ghana and a group of private international investors. A team of executives led by Ralph Atkin, a founder of Sky West Airlines in the United States was installed, which also included Brian Presbury, the former CEO of Kenya Airways”.

The Airline, according to documentary evidence was “owned by the Ghanaian government (70%) and US consortium (GIA-USA) (30%), but the shareholders have been engaged in a protracted legal dispute since 2006. The airline had 168 employees (at March 2008).”  So, how does an avowed capitalist, right wing, conservative, property owning political party seek to interfere in the market and potentially pick winners?

Some observers believe that it is due to the nature of the Ghanaian development condition.  And if that is the case, some on the left also ask, why condemn the huge investments made by the Nkrumah Administration that had GIHOC and other state organized agencies set up and operate?

Today Newspaper recalls that it is the Kufuor Administration that appointed a Minister for Private Sector Development and Minister for Trade and Presidential Special Initiatives all aimed at making the private sector “the engine of growth”To be continued.