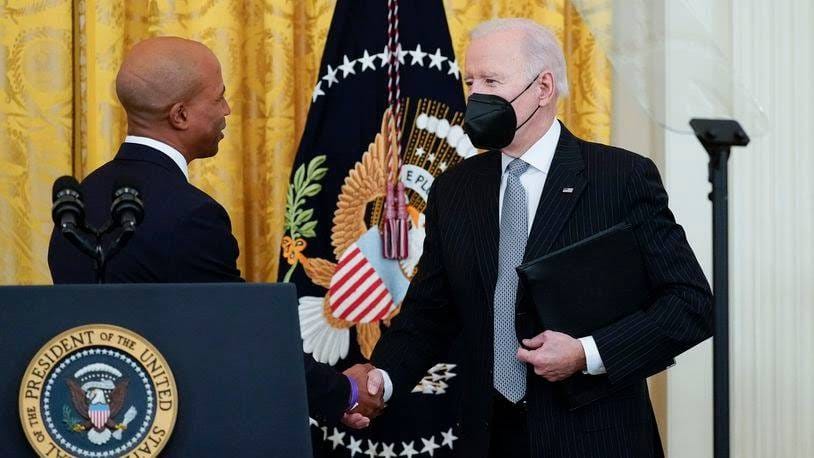 The President of the United States of America (USA) , Joe Biden, has appointed the son of businessman and politician in Ghana,  Dr Papa Kwesi Nduom, to an enviable job.

Dr Edjah Nduom will lead the fight against cancer in a “Cancer Moonshot Programme,” a tweet accompanied with photos showing him with the US president said.

This appointment is in line with an honour bestowed on him.

“Dr Edjah Nduom, son of businessman Dr Papa Kwesi Nduom, has been honoured and appointed by US President Biden to lead the fight against cancer in a “Cancer Moonshot Programme,” the tweet said.

In his address, President Biden told Dr. Nduom how special he was to him.

“See that doctor on the end there. That’s the man who spent 18 months trying to save our son’s life. Doctor, I love you. The whole family loves you,” Biden said.

According to nbcnews.com, on Wednesday, February 2, 2022, President Joe Biden announced a relaunch of the “Cancer Moonshot” programme started during the Obama administration.

It had a goal of ending a disease that kills more than 600,000 people a year in the US.

“We can end cancer as we know it. This is a presidential White House priority,” Biden is reported to have said.

Also, President Biden announced a campaign to get more people screened for cancer, noting that more than 9 million cancer screenings have been skipped during the COVID-19 pandemic.

Dr Edjah K Nduom, is an Associate Professor in the Department of Neurosurgery at Emory University School of Medicine in the US.

Dr Nduom’s clinical specialty is the surgical management of brain and spinal cord tumors. He is particularly interested in the safe resection of malignant tumors located in eloquent areas of the brain, the brainstem and spinal cord.

Dr. Nduom is a member of the Cancer Immunology Research Program at Winship Cancer Institute of Emory University. He holds numerous positions in national and international medical societies.

Notably, he is Co-Founder and Diasporan Representative of the Society for Neuro-Oncology Sub-Saharan Africa; International Outreach Committee

Co-Chair of the Society for Neuro-Oncology; Membership Director of the Joint Tumor Section of the American Association of Neurological

Surgeons and Congress of Neurological Surgeons; and Member of the Board of Directors of the National Brain Tumor Society.

Dr. Nduom received his MD from University of Pennsylvania in Philadelphia, Pennsylvania. He completed a residency in Neurosurgery at Emory

Disorders and Stroke in Bethesda, Maryland, and an additional Neurosurgical Oncology Fellowship at MD Anderson Cancer Center in Houston,

Dr. Nduom’s research focuses on the modulation of the immune system for the treatment of malignant brain tumors. He has presented his