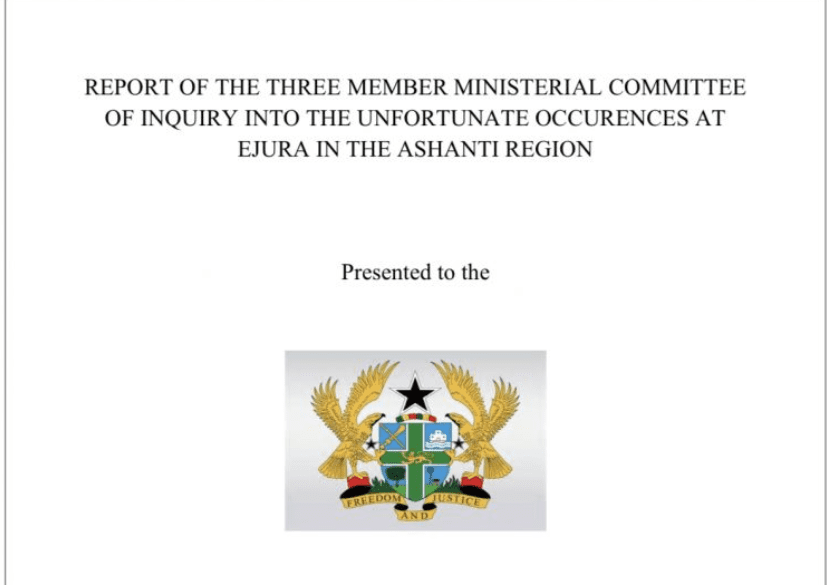 The Justice George Kingsley Koomson’s report on Ejura killings has been met with mixed reactions by some Ghanaians including politicians and security analysts
The report of the three-member ministerial committee that investigated the disturbances at Ejura in the Ashanti Region has been published by the government.
Among other things, the committee recommended the removal of the Municipal Chief Executive (MCE) for the area, who had already pulled out of the race for a new MCE, and compensation for the affected families and victims.
President Nana Addo Dankwa Akufo-Addo, earlier in July 2021, directed the Interior Ministry to conduct a public inquiry following the killing of two persons and injuries to four others by soldiers during a protest against the killing of a social activist, Ibrahim Muhammed, popularly known as Kaaka Macho.
Kaaka died on Monday, June 28, 2021, after he was attacked by unknown assailants while returning home from an event he attended in the area.
But commenting on the report, the Member of Parliament (MP) for Tamale Central, Ibrahim Murtala Mohammed took a swipe at the Committee, describing their work as poor.
He also expressed his dissatisfaction with the report, adding that the outcome of the findings proved that the Committee’s work was sub-standard,
The 55-page document, made available on the Ministry of Information website, also concluded that the riots that occurred in the town, fueled after the death of Mohammed Ibrahim (Kaaka), were instigated by the presence of the police.

The report also debunked reports that the late Kaaka’s death was linked to activism, stating that there was a more likelihood that a family feud could be the cause of his death. “We, accordingly, find that the death of ‘Kaaka’ was not directly linked to his social media activism. It is more probably a family feud. This is also supported by the testimony of Aminu Mohammed, a resident of Ejura and a friend of the late Kaaka,” the report stated in part.

The Tamale Central MP, however, said that in relation to its terms of reference, the committee failed to live up to expectations.
“I see it to be a very shambolic work done by the committee and I say this because the conclusions of the committee on many of the issues are completely funny, and I say it without any mincing words. Why would the committee that was set up to do fact-finding come and be giving us probable answers instead of certainty answers?”
“If you have a committee that sat on a matter such as this and the committee findings and conclusions are that the gentleman’s killing had nothing to do with social media activism but probably a family feud without establishing whether there was a known or an existing family feud, then it is a poor job done,” he was reported to have said.
Meanwhile a security expert, Mr Adam Bonaa, has rated the report of the Ejura Committee as one which is distinctive.

According to him, although he was skeptical about the work of the Committee from the beginning, the findings and recommendations were highly expected.
Speaking on Atinka TV, which was monitored by Today, Adam Bonaa said,” I will say good job done. Initially, I personally was a bit skeptical about the work they were doing because of some of their pronouncements and their gestures, but after receiving the report I thought it was good enough even though we cannot get a report which is full proof and that we have accepted everything. If you ask me to give them a rating, I would rate them 8 out of 10, which I think is an A+.”

Also sharing his perspective on the report Director, Faculty of Academic Affairs & Research, Professor Kwesi Aning described the final report as satisfactory and full of durable set of recommendations.
However, he said, the report had been blemished by its finding on the cause of the death of social media activist Ibrahim Anyass Mohammed, popularly known as Macho Kaaka.

He said in an interview with 3FM yesterday that , “probably this finding is one of the disturbing in an otherwise satisfactory report and very durable set of recommendations. “I don’t know the evidence that was adduced for them to arrive at this conclusion.”
In the meantime, the family of the slain Kaaka has rejected the report by the committee, stating that it is riddled with factual inaccuracies.