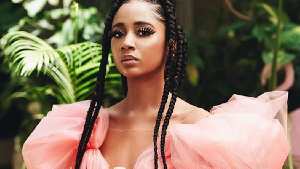 Ghanaian singer and model, Deborah Vanessa popularly known as Sister Derby has vented out at individuals advocating against the existence of an LGBTQ office in the country.

Her outburst follows calls from several individuals and religious entities who have kicked against the opening of an LGBT office in the country adding that its presence disregards the cultural values and sanity of the country.

But reacting to such, Sister Derby has taken to Twitter on February 22, 2021, to vent out her displeasure.

According to ‘Ghana Jollof’ hitmaker, members of the LGBTQ society are only seeking the protection of their rights by the state and nothing else.

She also labelled Ghanaians as hypocrites; adding that most parents cover up when their daughters are raped by family relatives but are quick to judge LGBTQ members.

In a harsh tone on Twitter, she wrote: “Bloodclarts, legalising #LGBTQI does not mean they are coming to molest or rape you like your uncles did while mothers protected them. That’s a crime. It means they will be protected from homophobes like you, so you can’t harm them! Let them be! Period!”

In a similar approach, Sister Derby’s elder brother, Wanlov the Kuborlor’ has also defended what he termed as the rights of the LGBTQ society in Ghana.

To him, there are more crucial issues in the country that needs to be dealt with and the existence of an LGBT office in Ghana does not form part of those.

Meanwhile, the Africa Centre for International Law and Accountability (ACILA) has identified that 87 percent of Ghanaians are against public meetings of the LGBT+ community in Ghana, according to its survey.