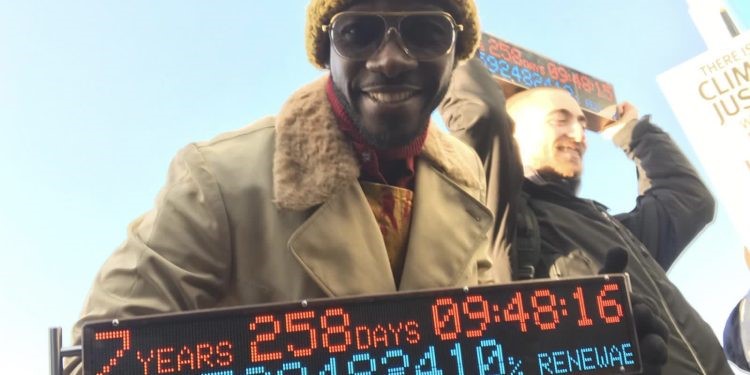 Ghanaian artiste, Okyeame Kwame, has refuted claims that his trip to Glasgow for this year’s United Nations Climate Change Conference was paid for by the government.

Responding to a social media user who wrote that he was wasting taxpayers’ money, the ‘Love Locked Down’ rapper insisted that he footed his bills to be part of the COP26.

“I work hard! Really hard to be able to do the things that I do. I paid for my own visa fees, my own tickets, my own hotel accommodation, and my own food while campaigning for Climate change. I am not on taxpayers’ money currently. I pray that you will be focused on improving the quality of your life rather than assuming who is paying for whose travels. The problems of Ghana are many, I’m trying to solve Climate change. What are you trying to solve?” He wrote.

This comes on the back of criticism that the government took too many people to the conference.

The conference is being held at the SEC Centre in Glasgow, Scotland, United Kingdom, between 31 October and 12 November 2021, under the presidency of Alok Sharma.

Okyeame Kwame, who is Ghana’s Climate Clock Ambassador joined about 100,000 people around the world, to march in Glasgow to create awareness about climate change and its effects.

The ‘Made in Ghana’ singer who got interviewed by several international media houses stressed the need to be concerned about the future of the world’s climate.

Okyeame Kwame said today’s generation must not endanger the future with irresponsible behaviour.

“We also have our responsibility to Climate Change while our leaders negotiate for the 100 Billion dollars in climate Justice. We can stop mining in the forest and rivers, stop burning our rubbish in our communities, stop overcharging our phones and all the little things we know causes land degradation. The time to act is now ….,” he also tweeted.

Okyeame Kwame is part of the UN delegation that accompanied the President, Ministry of Science Technology and Innovation, Environmental Protection Agency and other civil society organizations to the conference.

In 2018, Okyeame was appointed by Solidaridad West Africa as Climate Change Ambassador under the “Ghana Dedicated Grant Mechanism for Local Communities (DGM)” project.

He was also the ambassador for Forestry Commission’s ‘Red Plus Campaign.’

Okyeame Kwame is currently out with his latest single titled ‘Love Locked Down’ which was inspired by the maiden book he wrote with his wife.