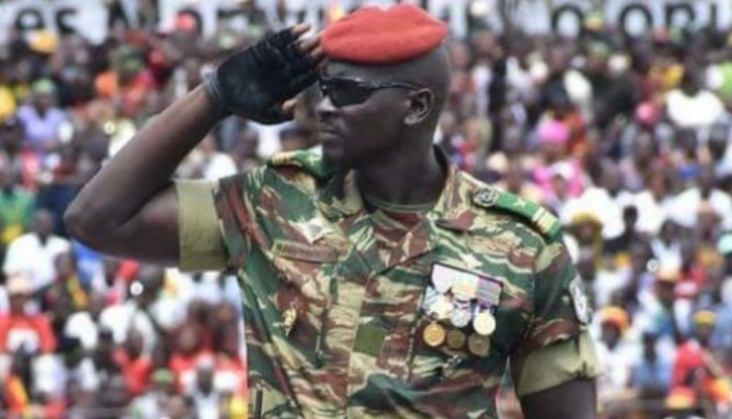 Col Mamady Doumbouya is seen as the new man in charge of Guinea after he led a unit of elite soldiers to seize power on Sunday.

Announcing the military takeover, the 41-year-old former French legionary said the army had little choice because of the rampant corruption, disregard for human rights and economic mismanagement under President Alpha Condé.

“The president is with us, he’s in a safe place,” he told French media on Sunday.

Dressed in a red beret, sunglasses and army fatigues, he had announced earlier on Guinea’s state TV that “the Guinean personalisation of political life is over. We will no longer entrust politics to one man, we will entrust it to the people”.

President Condé remains in detention while the UN, African Union and regional body Ecowas all condemn the military junta that claims to have replaced him.

After meeting ministers from Mr Condé’s government on Monday, the colonel said a new “union” government would be formed within weeks and promised there would be no “witch-hunt” against former officials.

Little is known about Col Doumbouya’s early life, except that he is from the Malinké community like President Condé and hails from Guinea’s eastern Kankan region.

By some accounts he is a brilliant commander, while others say his credentials are dubious.

Notably, Col Doumbouya is among 25 Guinean officials the EU has been threatening to sanction for alleged human rights abuses committed in recent years under President Condé.

Yet after Sunday’s takeover, he told the nation “we will learn from all the mistakes we have committed and all Guineans”.

Col Doumbouya also quoted the late Jerry Rawlings of Ghana – who seized power in 1979 – saying “if the people are crushed by their elites, it is up to the army to give the people their freedom”.

His 15-year military career has seen him serve in missions in Afghanistan, Ivory Coast, Djibouti, Central African Republic and close protection in Israel, Cyprus, the UK and Guinea.

He is said to have “brilliantly completed” the operational protection specialist training at the International Security Academy in Israel, as well as elite military training in Senegal, Gabon, and France.

After serving in the French foreign legion for several years, Col Doumbouya was asked by President Condé himself to return to Guinea to lead the newly established elite Special Forces Group (GFS) in 2018.

He was then based in Forecariah, western Guinea, where he served under the bureau of territorial surveillance (DST) and the general intelligence services.

In recalling Col Doumbouya to set up the GFS, President Condé will have had no idea that he was hastening his own political demise.