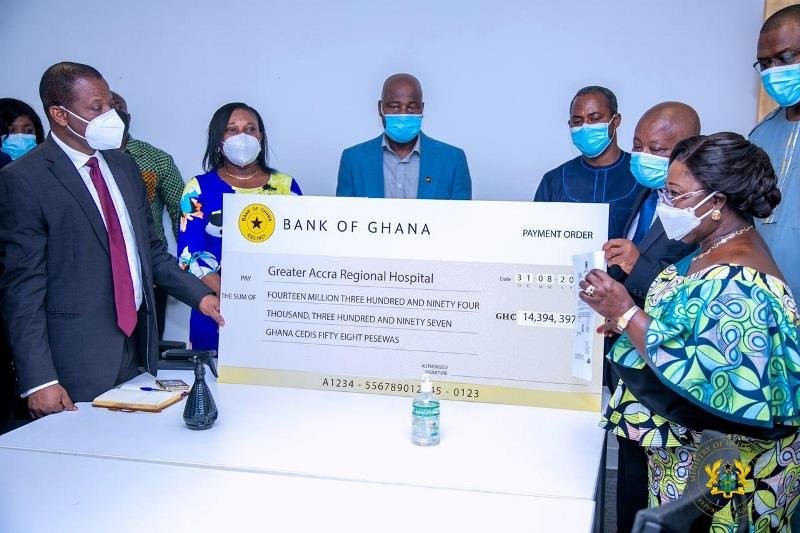 *For treatment of conjoined twins

Madam Akosua Frema Osei-Opare, the Chief of Staff, on Tuesday, presented a cheque for GH¢14,394,397, to the Greater Accra Regional Hospital at Ridge, for the procurement of medical equipment for the surgery of a Siamese twins.

The presentation came after President Nana Addo Dankwa Akufo-Addo, on July 5, 2021 announced that the government would bear the full cost of the surgery of the conjoined twins at the Greater Accra Regional Hospital at Ridge in Accra.

Handing over a dummy cheque together with the release letter for the funding to the Ghana Health Service (GHS), Madam Osei-Opare, said the effort by the Government, was not only to save lives, but to further encourage Ghanaian experts, by turning the scale of health care in Ghana.

“We want to show that Ghanaians have the capacity, and when given the necessary support we can do things on our own,” she said.

Dr Patrick Kuma-Aboagye, the Director-General of the Ghana Health Service, who received the cheque on behalf of the Hospital, thanked the Government for the swift response to the call for support for the surgery for the babies.

He indicated that the equipment to be installed at the hospital would not only help in saving the lives of many others, but would also promote Ghana’s efforts towards medical tourism on the African continent.

Dr Emmanuel Yao Voado, a Consultant Neurosurgeon and Co-Lead of the Team for the Separation of the Conjoined Twins, Greater Accra Regional Hospital, said the first out of the five steps of the surgery to be performed on the babies, had been scheduled for the third week of October 2021.

This was because some other parts of the equipment were yet to arrive in the country, and that after their installation, the medical team would have to practice the use of these new facility before the actual surgery was done, he said.

Dr Voado said the conjoined twins were currently five months, medically healthy, and God willing, could undergo a smooth process at the due date.

The twins are joined at the head, and doctors say it would cost about Three million Ghana Cedis to separate them, but then data available suggests that only about five per cent of conjoined twins at the head survive before surgery.

However, the doctors at the Greater Accra Regional Hospital are hopeful that the surgery will be successful, and further deem it as a historical event for the country’s medical