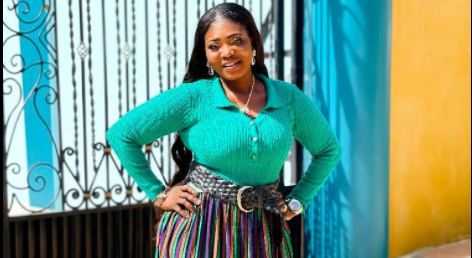 Ghanaian Gospel musician Florence Obinim is not bothered about trolls on social media because she gets more blessed and gains more positive assets when trolled.

Speaking on on TV3 which was monitored by Today , she said that some social media trolls were  hurtful with their utterances. But as a Christian, one must learn to deal with the prosecution.

“I will always get trolled so far as I have chosen to be a follower of Christ. Jesus Christ was spoken ill of, how much more me, being a follower of him. Trolls do not get to me. Sometimes when people criticize and speak ill of you, they have no idea that it is rather taking you to the next level. Trolling is like an exam for Christians, and I am a Christian. So I do not get so bothered.”

Florence revealed that she received emotional support from friends in the gospel industry during controversies about her husband, Bishop Obinim.
After taking a break from the music scene, Florence makes a comeback with her new single titled ‘Adekye3 mu Nsem’. She disclosed that the song encourages people to have hope and persist in achieving their goals each day.

She explained that goals can always be attained as far as one is alive. Hence it is vital to give thanksgiving to God.

“It is a blessing even when you wake up from bed. Do not think God does not want to give you something you asked from him because he still hasn’t provided. So far as you are awake, there is hope to get what you have yearned to have.

“Waking up to see another day is enough. So just give thanksgiving to God,” she reiterated.

Florence described the 2021 edition of ‘Women in Worship as electrifying worship performances where participants will be drawn closer to God.
She said this will be the fifth year since the inception of the annual all-women gospel music concert. And this signifies the presence of God’s power at the concert.

The ‘Okokroko’ hitmaker stated that participants should make their requests known to God and should believe with faith that their requests will be granted by the end of the concert.

“God’s power is manifested in me, so when coming for the program, make a request to God and tell yourself that with faith, you will receive what you what by the end of the programme.