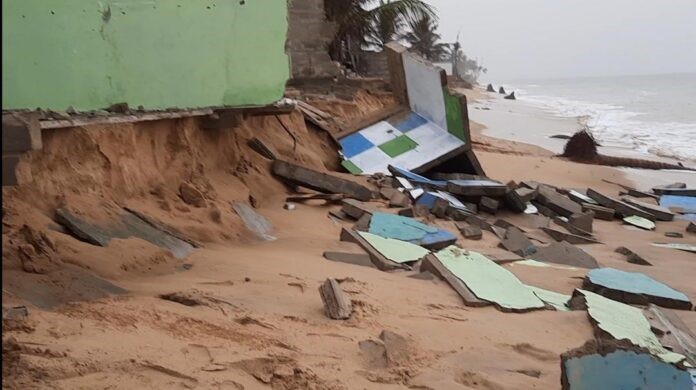 The Keta Municipal Health Directorate has indicated that it is taking steps to avert the potential spread of water-borne diseases and risk of diseases brought on by the flooding of the Keta area.

Emmanuel Korna the Keta Municipal Health Director told journalists  that his team had been educating affected residents to prevent any infectious outbreak.

“We are engaging with the communities to make sure that they don’t suffer from water born diseases. Now that the water is everywhere in the community there is greater likely hood that we may have problem with water borne diseases like diarrhoea  and typhoid fever so we are educating them,” he said on the heels of the tidal waves that affected Keta and its environs on Saturday, November 6, that has destroyed properties and rendered about 700 people homeless in the area.

The Member of Parliament (MP)  for the Ketu South constituency, Dzifa Abla Gomahsie had  asked government to declare a state of emergency along the coast of the Volta Region where heavy tidal waves destroyed houses and properties on Sunday dawn.

Dzifa Domashie said  the presidents must at all cost fix the perennial problem.

“The state of emergency should have been declared yesterday [ Sunday]” she told journalists on Monday November 8 on the heels of the tidal waves that affected Keta and its environs on Saturday, November 6, that has destroyed properties and rendered about 700 people homeless in the area.

Meanwhile, the Minister of Works and Housing, Francis Asenso-Boakye has said that while government makes all the necessary efforts to avert tidal waves from happening, coastal residents should also avoid practices that expose them to vagaries of the rising sea levels.

According to him, there have been reported cases of sand winning, uprooting of mangrove along the coastal stretch.

If these continue, he said, the investments by government cannot yield the needed protection.

Speaking at a press conference in Accra on Monday November 8,  2021 in connection with the tidal waves that affected Keta and its environs on Saturday, November 6, he said “I must reiterate that Government acknowledges the urgent need to permanently address the devastating effects of tidal waves in the affected towns of Agavedzi, Salakope, and Amutsinu communities in the Ketu South Constituency.

“These communities are on the same coastal stretch as Blekusu, also in the Ketu South Constituency. This coastal stretch is characterized by narrow beaches and the effects of tidal waves along the coastal stretch can be very devastating, and consequently result in beach erosion, loss of land, property and sometimes extensive flooding in the event of wave overtopping.

“The erosion of the beaches also impacts negatively on fishing, which is the main source of livelihood of the communities along this coastal stretch.

“As part of measures to curb these devastating incidences in these towns, in July 2015, the Ministry of Works and Housing engaged Messrs Amandi Holding Limited to design and construct coastal protection works along this stretch, starting from Blekusu and working towards Agavedzi, Salakope, and Amutsinu under the Blekusu Coastal Protection Project.

“The project, which protects 4300 metres (i.e., 4.3 kilometres) of the coastal stretch, had the first phase completed in July 2019, and has since functioned effectively, protecting lives, livelihoods and properties while reviving fishing

“The Ministry has finalized the Evaluation of the relevant proposal to start the works under the second phase of the project.

“It is important to note that in April 2021, a technical team from the Hydrological Services Department of the Ministry, upon my directive, travelled to the affected communities to engage the Municipal Chief Executive of Ketu South Municipal Assembly and Some community leaders on the matter of the implementation of the second phase of the project. I have also had the opportunity to visit these communities, together with the technical team from the Ministry and the Hydrological Services Department, in June this year, to have a first-hand understanding of the situation.

It is envisaged that the completion of the works envisaged under the second phase of the project will cover a minimum coastal stretch of 8,000 metres (8 kilometres) and this will surely ensure the total protection of the people of Agavedzi, Salakope, and Amutsinu communities and other affected communities within the Constituency that continue to bear the brunt of this occasional

The scope of works under the second phrase of Blekusu Coastal Protection Project (Phase 2) entails the construction of 37 armour rock groynes, with land reclamation, to protect eight (8) kilometres of coastal stretch.

“The Ministry is currently engaging the Ministry of Finance to raise the needed funding for the implementation of the second phase. It is important to note that value addition is critical in ensuring that a platform for recouping the capital investment is provided. Thus, in addition to protecting lives and properties, the works under the Blekusu Coastal Protection Project (Phase 2) will protect the beaches and its environs against encroachment by the sea, arrest the current environmental deterioration, mitigate the social and economic consequences of beach erosion, and strengthen the economic and production base of the area through enhanced fishing activities.”