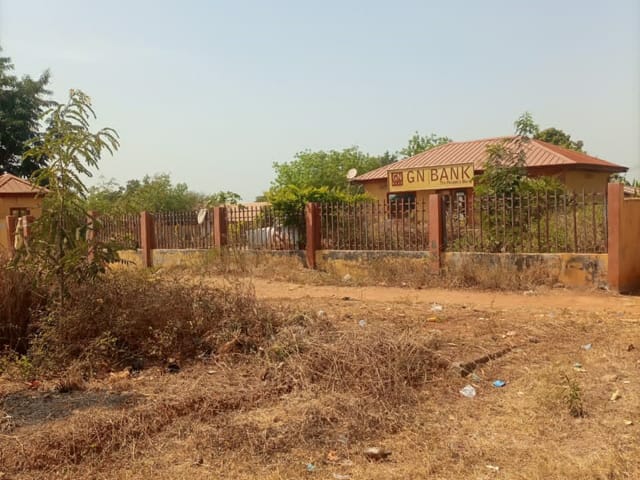 The Today Newspaper has uncovered wanton destruction and massive financial loss caused by the disputed revocation of the GN Savings license by the Bank of Ghana (BoG).

At the time of the  license revocation, the financial institution had the biggest financial distribution network with its more than 300 locations used to service the needs of banking, insurance, investment and even products such as TVs and rice produced in Ghana.  It offered employment to over 7,000 workers in all 16 regions.

Our investigators uncovered abandoned buildings purposely built for banking with no security presence. There was evidence of break-ins, actual and attempted.

The compounds in many  instances overgrown with weeds.  No maintenance works have been done since 2019 and the resulting decay and destruction were clearly visible.

One could see computers and other office equipment still sitting inside the offices.  Air conditioning units have been taken away and virtually all generators removed.

In some locations, vehicles have been parked and remained in place since 2019 with no maintenance or care.  While the Receiver is going around chasing after loan customers to collect payments, Today couldn’t help wonder why these assets have not been given attention to prevent the massive rot and loss of value happening throughout the country.

Today’s readers will recall that the BoG   introduced in 2017, an unprecedented gargantuan increase in minimum capital requirement for universal banks from 120 million Ghana Cedis to 400 million Ghana cedis.  Some banks were closed by the Bank of Ghana and sold to another bank.  Others were combined to create a new state-owned bank.

The crisis in the financial system hit in full steam in August of 2018.  Prior to that, GN Bank was a very, highly liquid bank with a high performing loan portfolio.  The Bank’s customers were happy with the People’s Bank.  An international accounting firm Ernst & Young engaged by the BoG   to perform diagnostic studies of universal banks had earlier found GN Bank to hold adequate provision for its financial exposures.

“The consequence of the reforms in the investment and banking system became our tsunami”,  a manger of the defunct GN Bank told this reporter.

On one side, a sister company,  Gold Coast Fund Management, Today further gathered  experienced unprecedented redemption of investments; and on the other, panic withdrawals hit the Bank in every one of the 300 banking locations.  The Bank suffered what every deposit taking institution would go through with such multiple source attack.

The management according to our sources  pleaded with government agencies, BoG and central government to assist them to retrieve receivables from government contracts.

No one, our sources at the GN Bank  said  was interested in assisting with the calming of customer fears and anxieties.   Rather, the question GN Bank got was, “what’s wrong with you, what have you done wrong?”  With a national retail banking business stretching from Accra to Kumasi, to Djemeni, Kwame Danso, Twifo Praso, Wulensi, Pusiga, Nandom, etc., to support national development the Bank of Ghana, first reclassified the Bank to become a savings and loans company and a few months later, revoked its license.

The Shareholders of GN Bank/GN Savings took the BoG and the Receiver to  court to challenge the revocation of its license in 2019.

The High Court judge announced her readiness to rule on the case in December 2020.  That ruling is still pending due to the numerous legal maneuverings and delay tactics used by the BoG’s attorneys.