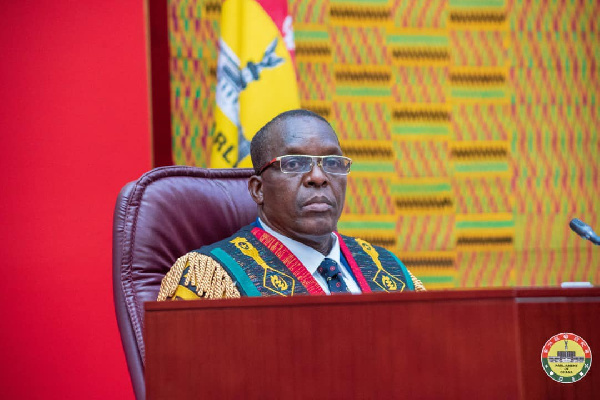 Speaker of Parliament ,Rt. Hon.  Alban Bagbin has  demanded that  the Finance Minster Ken Ofori-Atta render an account to Parliament on the utilization of Covid -19 funds.

This  follows the government’s request to parliament  for  approval  of another covid-19  loan facility .But Mr Bagbin who was not pleased  with the government’s decision indicated that  It was only after this accountability that the House would consider approving or otherwise another loan.

“The Ministry of Finance must give an account of all the monies that it has gotten for the management of COVID-19. Only after that will this House consider approving or otherwise another loan,” Mr Bagbin said in Parliament on Thursday May 26, 2022  while placing a freeze on the approval of a 75 million euro loan for COVID-19 Response contracted from the European Investment Bank  by the Government of Ghana.

He added: “I direct that the Minister of Finance appears before this House to account for all the monies that were approved for the utilisation of the covid pandemic.”

The government had been called upon to render an account of the funds spent on managing the Covid situation.
For instance, former President John Dramani Mahama   who accused the government of mismanaging the funds dared the President Akufo-Addo to challenge his claim by allowing an independent forensic audit into how COVID -19 funds were used.

Mr Mahama accused the government of diverting funds during a lecture at the Harvard Business School “…to make matters worse a pandemic windfall in excess of Ghs33bn which could’ve cushioned the economy remain unaudited and it is believed to have been used largely in a quest to win election 2020 at all cost” he told participants”.
Speaking at the 4th summit of the National Democratic Congress (NDC) Professionals Forum in Kumasi recently, he maintained his claim and challenged the government to prove him wrong with a forensic audit.
“The only way you can prove me wrong and say that that money was not used for election 2020 is to allow an independent forensic audit into how the money was used,” he said.

Also,members of the Minority Caucus led by MP for Ajumako-Enyan-Esiam, Cassiel Ato Forson had questioned the failure of the Finance Minister to properly account for funds received in the name of the pandemic so far.

Another Minority MP, Emmanuel Bedzra  threatened to mobilize the NDC MPs to vote against the loan since the President himself had through relaxation of the Covid restrictions given an indication the worst of the pandemic was over.

Meanwhile Majority  Chief Whip, Frank Annoh-Dompreh, has bemoaned the direction given by Speaker of Parliament,  for Mr Ofori-Atta to give an account of Ghana’s COVID-19 expenditure before a loan request could be approved.

According to him, the action of the Speaker was unfortunate since he did not have the power to give such directions of his own volition.

Mr. Annoh-Dompreh , who was speaking at a press conference in Accra last week indicated that only MPs could conclude on such a decision for the Speaker to only communicate.

“… the Speaker has no persona of his own. Such a decision has to be the sense of the house. He [Bagbin] cannot communicate his own decision, especially when he is not a Member of Parliament. The sense of the house at that moment is that the question should not be put, but it wasn’t that the Finance Minister must first come to the house to render an account,” he said.

Also, Annoh-Dompreh, who is an MP for Nsawam/Adoagyiri, added that the government was not running away from accountability for its COVID-19 expenditure as some persons were  asserting.

“Nobody is shying away from accountability, but that wasn’t what the house was saying. When the Majority Leader returns, we are going to engage the Speaker. Going forward we don’t want to have any banter with the speaker but where we think that things need to be straightened we will find a diplomatic way of reaching out to ensure that we have peace for the progress and execution of the work of parliament,” he added.