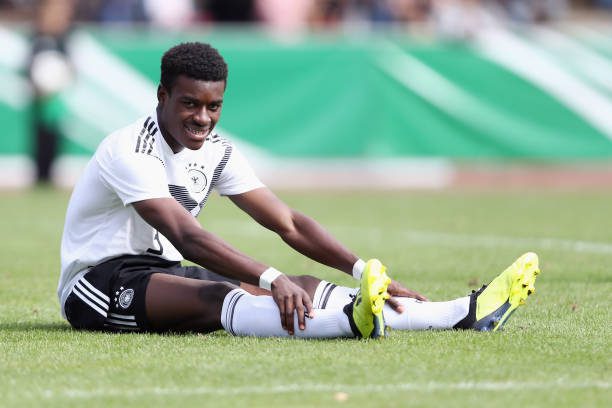 Charles-Jesaja Herrmann, who is the son of Charles Akonnor, has revealed he will like to play for Ghana despite representing Germany at different youth levels.

Herrmann was born and raised in Germany as he is currently on loan to Kortrijk from his parent club Wolfsburg.

The striker joined Wolfsburg club in 2015 through his father’s old agent.

In an exclusive interview with omasports, Herrmann revealed he is connected to Ghana although he hasn’t visited the country in over a decade.

“I grew up with Twi. My mother taught me how to speak Twi. I can’t speak it well. When I speak people understand me, but not the African way. But I can speak Twi. It’s good.”

“I can name a lot of Ghanaian footballers. I follow them. The Ayew brothers. Sulley Muntari. I watched them all in the World Cup in 2006. Asamoah Gyan. Michael Essien. Because of Essien, most Ghanaians want to play for Chelsea. They’re like legends. Yes and my dad of course. Abedi Pele, Tony Yeboah,” he added.

Herrmann dreams of playing at the World Cup and wants to regain confidence in front of goal for now.

“I want to achieve many many great things to be honest. I know the way won’t be easy to get to where I want to get. But right now I’m focused on getting playing time so I can start to score. So I hope the following year I can go to the World Cup.”

It’s in my mind right now. I want to start playing and scoring goals so I can feel better on the pitch, feel confident. So when the call up comes, I hope I can help my fatherland.”

Herrmann has played in three league games for Kortrijk in the Jupiter Pro League next season.