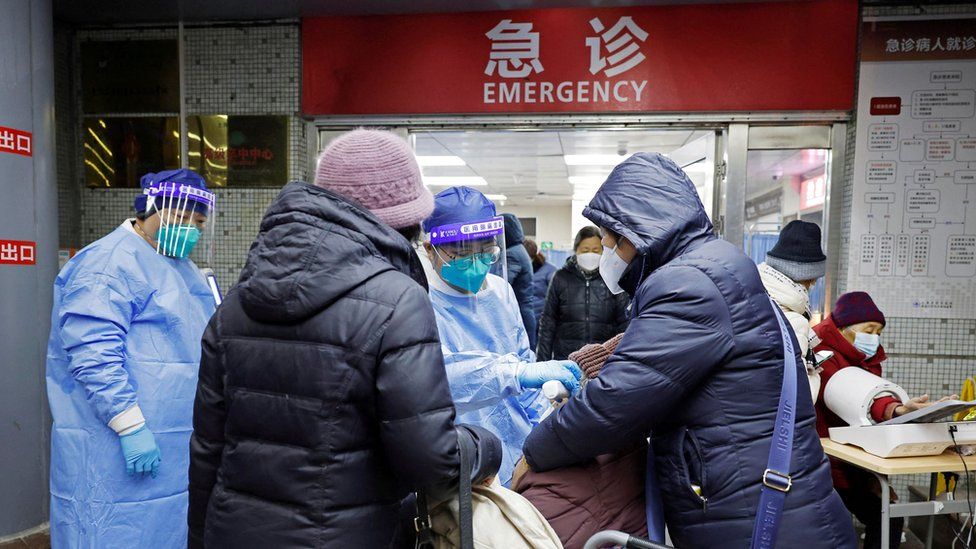 China will scrap quarantine for travellers from 8 January, officials said, marking the last major shift from the country’s zero-Covid policy.

After almost three years of closed borders, this will reopen the country to those with work and study visas, or seeking to visit family.

But it comes as China struggles with the virus’s ferocious spread in the wake of restrictions being lifted.

Reports says hospitals are overwhelmed and elderly people are dying.

On Sunday it said it would stop publishing case numbers altogether. But British health data firm Airfinity estimated China was experiencing more than a million infections and 5,000 deaths a day, according to Reuters.

China is the last major economy in the world to move to “living with Covid” after three years of lockdowns, closed borders and mandatory quarantine for Covid cases and contacts.

The so-called zero-Covid approach battered the economy and made citizens weary of restrictions and repeated tests.

Closed borders remain the last major restriction. Since March 2020, anyone entering China had to undergo mandatory quarantine at a state facility – for up to three weeks at a time. That was recently reduced to five days.

But on Monday the National Health Commission announced that Covid would be formally downgraded to a Class B infectious disease on 8 January.

That meant quarantine would be axed – although incoming travellers will still need to take a PCR test – and a cap on the daily number of flights allowed into China would also be scrapped.

Authorities said they would also “optimise” visa arrangements for foreigners wishing to come to China for work and study, as well as family visits and reunions.

It’s unclear if that includes tourist visas, but officials said a pilot programme would begin for international cruise ships.

The new rules have been welcomed by many Chinese who will now be able to travel overseas again. The country’s top online travel agencies reported a spike in traffic within hours of the announcement.

But many have also expressed anger over the sudden freedom after years of controls.

“I’m happy about it but also speechless. If we’re doing this [reopening] anyway – why did I have to suffer all the daily Covid tests and lockdowns this year?” said Rachel Liu, who lives in Shanghai.

She said she had endured three months of lockdown in April, but nearly everyone in her family had become infected with the virus in recent weeks.

She said her parents, grandparents and partner – living across three different cities in Xi’an, Shanghai and Hangzhou – had all come down with fever last week.

Many have also expressed concern online about borders reopening as Covid cases peak in China.

“Why can’t we wait until this wave passes to open up? The medical workers are already worn out, and old people won’t survive two infections in one month,” read one top-liked comment on Weibo.

People in cities like Beijing and Shanghai, which experience chilly temperatures in the winter, say they’re running out of flu and cold medicine and scrounging for medical help for sick relatives. It’s feared that hundreds of deaths may be going unreported as crematoriums are overwhelmed.

On Monday, President Xi issued his first remarks on the changes, calling on officials to do what was “feasible” to save lives. State media quoted him saying the country faced a new situation with pandemic control, and needed a more targeted response.

China’s about-turn on how it manages the pandemic has put Mr Xi in a tough spot, analysts say. He was the driving force behind zero-Covid, which many blamed for restricting people’s lives excessively and crippling the economy.

But having abandoned it, analysts say he now has to take responsibility for the huge wave of infections and hospital admissions. Many have questioned why the country was not better prepared.