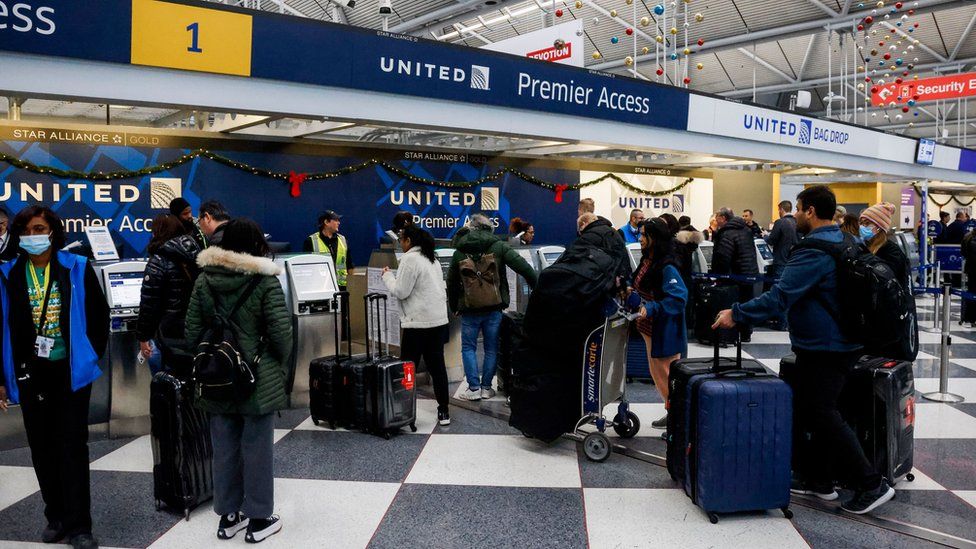 The US is considering imposing new Covid restrictions on Chinese arrivals, after Beijing announced it would reopen its borders next month.

American officials say this is due to a lack of transparency surrounding the virus in China, as cases surge.

On Wednesday, Italy announced plans to enforce mandatory testing, after tighter measures were outlined by Japan, Malaysia, Taiwan and India.

Beijing said coronavirus rules should be brought in on a “scientific” basis.

Officials in the Italian city of Milan are already testing passengers on flights from China.

On one flight, which landed at the city’s Malpensa Airport on Boxing Day, 52% of passengers were found to be positive for Covid, la Repubblica reports.

Officials are yet to comment on these figures but, in a statement, Health Minister Orazio Schillaci said he had ordered mandatory Covid-19 testing for all passengers coming from China and transiting through Italy.

He said this was “essential to ensure the surveillance and identification” of any new variants of the virus, and to “protect the Italian population”.

Italy was ravaged by Covid during the first outbreak in 2020, with the northern region of Lombardy – near Malpensa Airport – at one point becoming the global epicentre of the virus after it spread from China.

An EU Foreign Affairs spokeswoman said while member states had agreed to remove Covid travel restrictions earlier this year, there was an understanding that, if necessary, they could be reintroduced in a coordinated manner.

She also said that the BF7 omicron variant – prevalent in China – was already present in Europe and had failed to become dominant.

Passport applications for Chinese citizens wishing to travel internationally will resume from 8 January, the country’s immigration authorities have said.

Travel sites have reported a spike in traffic, leaving some countries fearful over the potential spread of Covid.

“There are mounting concerns in the international community on the ongoing Covid-19 surges in China and the lack of transparent data, including viral genomic sequence data,” US officials said in a statement quoted by news agencies.

He said China believed all countries’ Covid responses should be “science-based and proportionate”, and should “not affect normal people-to-people exchange”.

The UK and Germany each said they are monitoring the situation closely, but are not currently considering new restrictions for Chinese travellers.

A Downing Street spokesperson said the number of cases in Britain was still “relatively low”.

Meanwhile, a German health ministry official said there was “no indication that a more dangerous mutation [of Covid] had developed”.

The true toll of daily cases and deaths in China is unknown because officials have stopped releasing the necessary data. Reports say hospitals are overwhelmed and elderly people are dying.

Before the relaxation of travel rules, people were strongly discouraged from travelling abroad. The sale of outbound group and package travel was banned, according to marketing solutions company Dragon Trail International.

Within half an hour of Monday’s notice that China’s borders would reopen, data from travel site Trip.com – cited in Chinese media – showed searches for popular destinations had increased ten-fold on last year.

Macau, Hong Kong, Japan, Thailand and South Korea were the most popular destinations.

Separately on Wednesday, Hong Kong’s leader John Lee announced that his city was scrapping the last of its Covid rules almost immediately – apart from the wearing of face masks, which will remain compulsory.

“The city has reached a relatively high vaccination rate which builds an anti-epidemic barrier,” Mr Lee told a media briefing.

The US still requires international travellers to show proof of being fully vaccinated against Covid on entering the country.

The website for the Centres for Disease Control and Prevention (CDC) also recommends that anyone travelling to the US gets a Covid test beforehand and has their result to hand – but this is not a legal obligation.

In their statement, the unnamed US officials added they were “following the science and advice of public health experts” and “consulting with partners”.

China’s loosening of travel measures – the last part of the country’s controversial zero-Covid policy – follows weeks of unrest which saw people take to the streets in rare protests against President Xi Jinping and his government.