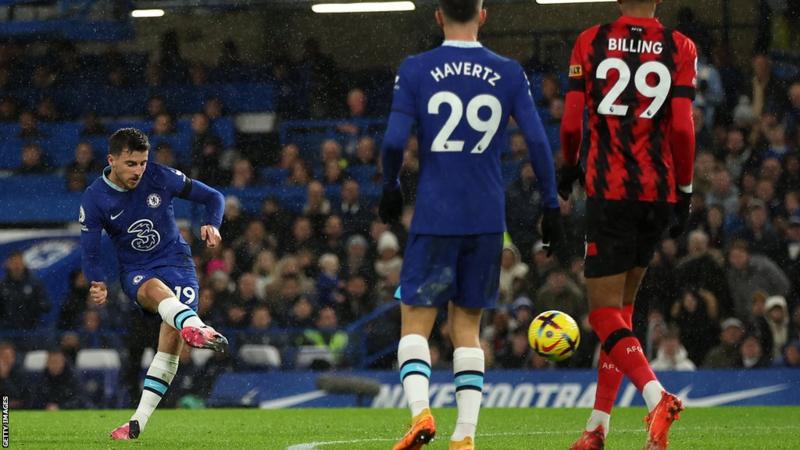 Chelsea boosted their top-four hopes as they resumed their Premier League season with a comfortable victory over Bournemouth at Stamford Bridge.

Having failed to score in three consecutive matches prior to the break for the World Cup it took Chelsea less than 16 minutes to get up and running with Kai Havertz sliding in an effort at the back post from Raheem Sterling’s low cross.

With the hosts dominant, Mason Mount celebrated his 150th appearance for Chelsea in style, curling a superb effort into the bottom right corner of the Bournemouth net from the edge of the penalty area.

It drew a nod of satisfaction from manager Graham Potter, who will have been delighted by the slick performance his side delivered, particularly during the first half.

Christian Pulisic saw an effort ruled out after Havertz was judged to have fouled Adam Smith, while the German also spurned a second-half opportunity to extend Chelsea’s lead.

The result sees Chelsea move up to eighth in the table, six points adrift of fourth-placed Tottenham with Bournemouth remaining in 14th.

The only negative in Potter’s and Chelsea’s evening came with the earlier-than-planned withdrawal of Reece James, seven minutes into the second period, on his return from the knee injury that ruled him out of the England squad for Qatar.

The 23-year-old lay on the turf with his hands on his head before receiving treatment and eventually walking off unaided.

While the Cherries improved after the break, and substitute Ryan Christie forced home goalkeeper Kepa Arrizabalaga into a good save, they rarely looked capable of applying any late pressure to the hosts.

Chelsea had come into the contest with question marks over their direction of travel under Potter after a damaging sequence of three consecutive top-flight defeats prior to the World Cup.

However, they appeared galvanised and looked as though the opportunity to reset had worked in their favour.

There was a notable fluency to their play, particularly via the combinations that Sterling, James, Mount and Italian playmaker Jorginho provided, while Havertz and Pulisic worked tirelessly up front to offer an outlet.

And until he was forced off, everything that right-back James produced oozed class.

His marauding runs down the right gave Chelsea an added dimension in attack, with only a good save from visiting goalkeeper Mark Travers denying him a goal just before the break.