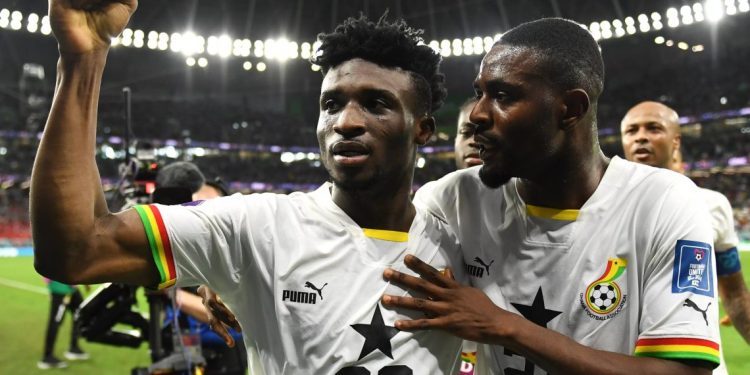 A goal from Mohammed Salisu and a Mohammed Kudus brace gave  Ghana’s Black Stars a 3-2 win over South Korea in their second game of the 2022 World Cup in Qatar.

Despite a brief second-half rally from the South Koreans, Otto Addo’s side picked up all three points to keep them in the race for a Round of 16 place.

Following the opening-day loss to Portugal, the Black Stars needed to avoid defeat against the Koreans to stave off early elimination from the tournament.

This was clearly on the minds of the players as a nervy start allowed the South Koreans to dominate the early stages of the game.

South Korea racked up a corner count of seven but failed to significantly test Lawrence Ati Zigi in the Ghana goal.

After surviving the early onslaught, the Black Stars grew into the game and promptly took the lead.

South Korea failed to deal with a Jordan Ayew corner and the ball fell to Mohammed Salisu who found the net.

After a nervy wait where the VAR checked on a possible handball by Andre Ayew, Salisu and his teammates could finally celebrate their goal.

10 minutes later, the Stars doubled their lead and, yet again, Jordan Ayew was heavily involved.

His in swinging cross from the left found the head of Kudus Mohammed who glanced the ball home.

The Black Stars almost scored a third but despite Partey’s failed attempt to find the net with his header, the Ghanaians went into the break with a healthy lead.

The two-goal lead disappeared 13 minutes after the break in a three-minute blitz.

The Ghanaians were not shell-shocked for long as only seven minutes after conceding the equaliser, the Black Stars were back ahead.

Forward Inaki Williams completely missed a ball from the left but it fell at the feet of Kudus Mohammed who fired home.

There were chances for South Korea to score the next goal but they found Ati Zigi in fine form.

The Stars held on, despite 10 minutes of added time, for their first victory of the 2022 World Cup

Ghana now go into the game against Uruguay knowing a draw, and favourable results in the other games might well take them through to the Round of 16.