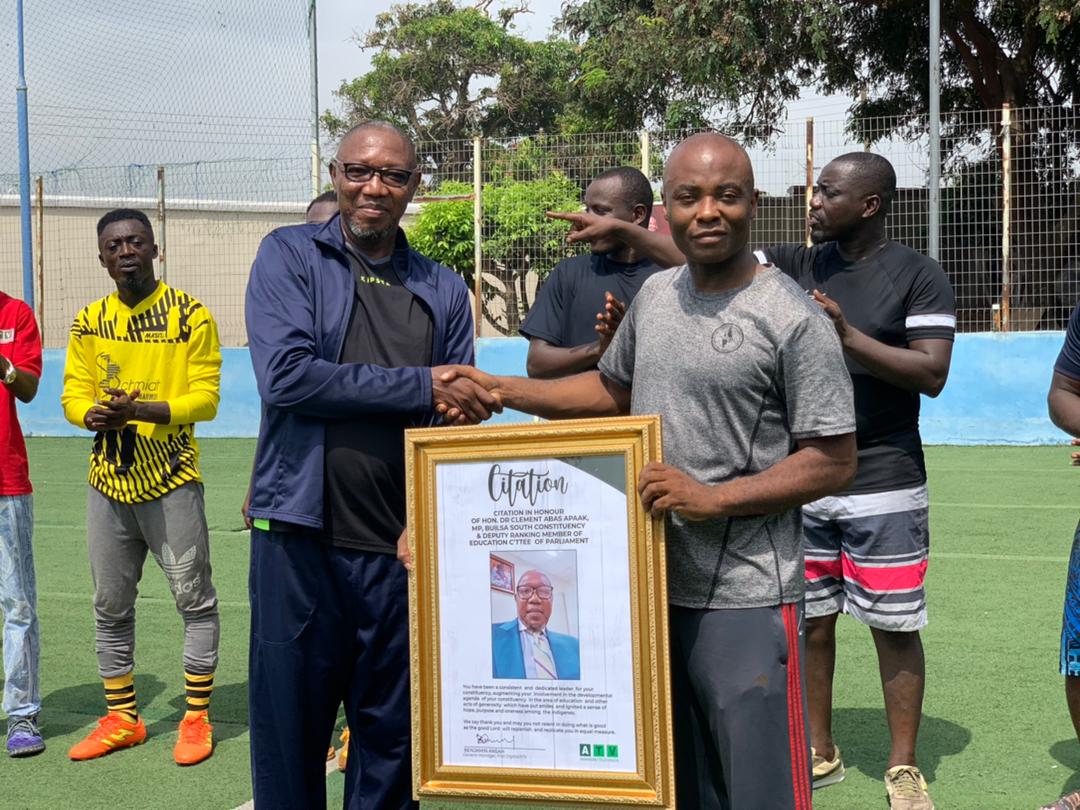 The management of an Accra-based television station,Amansan Television(ATV) and its sister company, First Digital,all members of Groupe Nduom,a multi-national conglomerate,has appreciated the contribution of the Member of Parliament (MP)  for Builsa South, Hon.Dr Clement Abas Apaak in the area of education.

Dr Apaak who is the  Deputy Ranking Member on parliament’s Education Committee  was therefore honoured by ATV at the station’s end of year fun games  held on Friday,December 10, 2021 at the Aviation Social Centre in Accra.

In a citation read  on behalf of the Station by Head of News of ATV,Atta Kwaku Boadi to acknowledge the immense contribution of the Builsa South MP, said,”you have been a consistent  and  dedicated leader  for your constituency, augmenting your  involvement in the developmental agenda  of your constituency  in the area of education  and other acts of generosity  which have put smiles  and ignited a sense of hope, purpose and oneness among  the indigenes.

We say thank you and may you not relent in doing what is good  as the good Lord  will replenish  and replicate you in equal measure”.

In his acceptance remarks,the vociferous  MP thanked the management of ATV  and First Digital particularly, the Chairman and President of Groupe Nduom ,Dr  Papa Kwesi  Nduom for recognising his good works to the development  of the country.

Dr Apaak who could not  hide his excitement said, “this  is my first  award since  i became a politician”.

To this end, he said,  the honour done him would spur him on to do more for the country,especially  his constituents who he dedicated the award to.

He urged the ATV staff  not to give up, but to continue to hold public office holders accountable by bringing out the ills in society.

He also used the occasion to call on the government to recognise the rights of Persons With Disabilities(PWDs).

He indicated that, the PWDs in Ghana deserved better, hence his appeal to government not to abandon them.