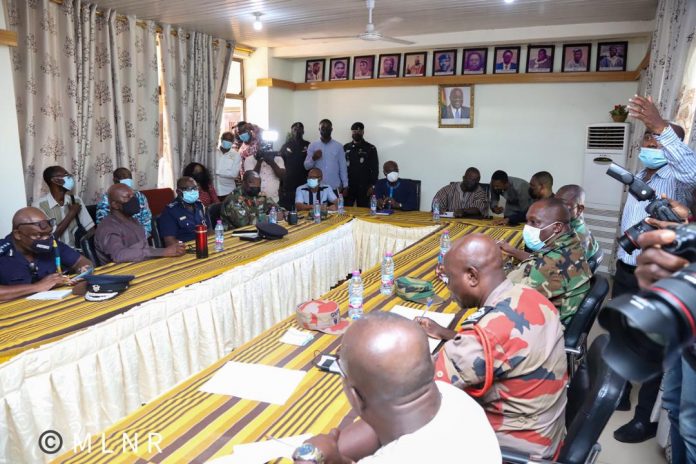 PresidentNana Addo Dankwa Akufo-Addo has asked Regional Security Councils (REGSECs)  in all mining regions to be the fulcrum for the enforcement of the fight against illegal mining (galamsey) in the country.

The Minister for Lands and Natural Resources Samuel A.Jinapor who disclosed this, said the move, will among others, help ensure effective security operations at all levels in curbing the menace of illegal mining.

He added that the security architecture of the management of the Lands and Natural Resources, rest with the Regional Security Council’s across the country, saying that, with absolute commitment and teamwork, the government’s quest to protect Ghana’s forest cover and water bodies will be achieved.

The Northern Region, the Minister said, is the parent of all the five regions in Northern Ghana, with Tamale fast becoming the headquarters of Northern Africa with network from Burkina Faso, Mali among others.

He also described Tamale as the city at the center of all developmental affairs in the northern sector, hence any challenge within the metropolis automatically will have shared consequences for the other regions.

He therefore called on the traditional authorities, opinion leaders and government officials in and around the region to safeguard the area in order to remain relevant in the development agenda of government.

The Minister further mentioned some intervention being made by government to stop the illegal harvesting of wood including the impounding of Rosewood and the outright ban on the commodity as well as a soon-to-be rolled-out aggressive Afforestation drive in response to deforestation to restore the country’s forest cover.

On his part, the Northern Regional Minister, Shani Alhassan Shaibu who is also the chair of REGSEC bemoaned the wanton encroachment on public lands, forest reserves, and sand winning which has become a challenge in the region.

He hoped the current partnership with the Ministry will resolve many of these challenges and will go a long way to protect the natural resources of the country.