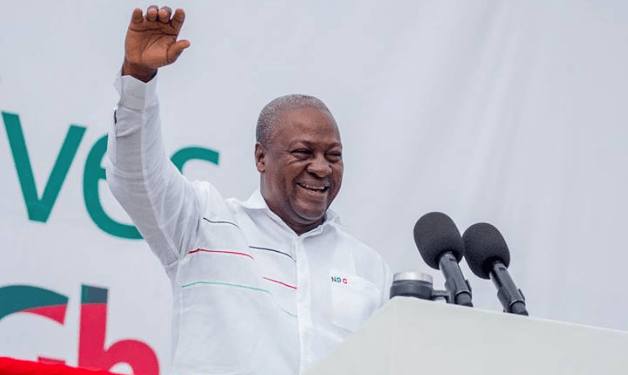 Mahama’s  Comeback Gets boost as Haruna Iddrisu endorses his candidature

Former President  John Dramani Mahama has received massive support ahead OF   the  2024  presidential primaries of the opposition National Democratic Congress (NDC).The former Ghanaian leader  who  was the flag-bearer of the NDC in 2020 elections   although is yet to announce  his interest to lead his party again , many  people, particularly,  the rank and file of the NDC want to his name on the 2024 Presidential  Ballot Paper .

The latest to join the call on Mr Mahama to comeback and lead the NDC   is the party’s leader in Parliament, Haruna Iddrisu.

“I want former President John Mahama to return as flagbearer, and subsequently the President after the 2024 elections”, he said.

This put to rest the early rumours and speculations   that the Minority Leader was lacing his boots to contest the NDC’s presidential primaries.

However,  Mr Iddrisu  said, the party could only secure victory in 2024  if it would be  extremely vigilant at all polling stations across the country.

The Tamale South Member of Parliament (MP)   therefore charged party loyalists to keep their eyes open against electoral ploys that will cause the NDC’s defeat.

“The NDC will call for greater transparency, especially at the collation of the results. Zero-tolerance for 2024 will be our declaration, and we will police the ballot. I always say that for persons who love President Mahama and want his return just as I want, go to your polling station and make sure he wins. Nothing more. If he wins at the 33,000 polling stations, he will be the next President of the Republic”, he said  this  on Citi TV which was monitored by Weekend Today .

“It is not about running to take photographs with him thinking that is how you are contributing to the success of the NDC; I don’t think going to take pictures with him means he has won. I think we should go back to our roots as NDC with operation win your ballot box”, he added.

Although there is no certainty yet about John Mahama’s political future with the party; there appears to be visible signs indicating a possible comeback.

The former President recently embarked on a ‘Thank You’ tour across the country to thank Ghanaians who voted for him and the NDC in the 2020 election, although the party lost the polls.

While on one of his trips, John Dramani Mahama said his party will be more vigilant at the polls during the 2024 general elections, using the phrase ‘do or die’, which has sparked a storm of condemnation and commendation alike.

The former President said the NDC won the 2020 parliamentary and presidential elections, but was robbed of victory.

“The 2020 elections were rigged for the NPP. We have however accepted the ruling of the Supreme Court for the sake of peace. However, come 2024, the NDC will be extra vigilant at the polling stations because that is where the elections are won. So at the polling station [in the next election], it will be ‘do or die’. I am not saying all ‘die be die’. I’m saying it will be ‘do or die’ because the right thing must be done,” John Mahama has said.

The NDC has also stated that, it will deploy more professionals to monitor the 2024 elections at various levels.