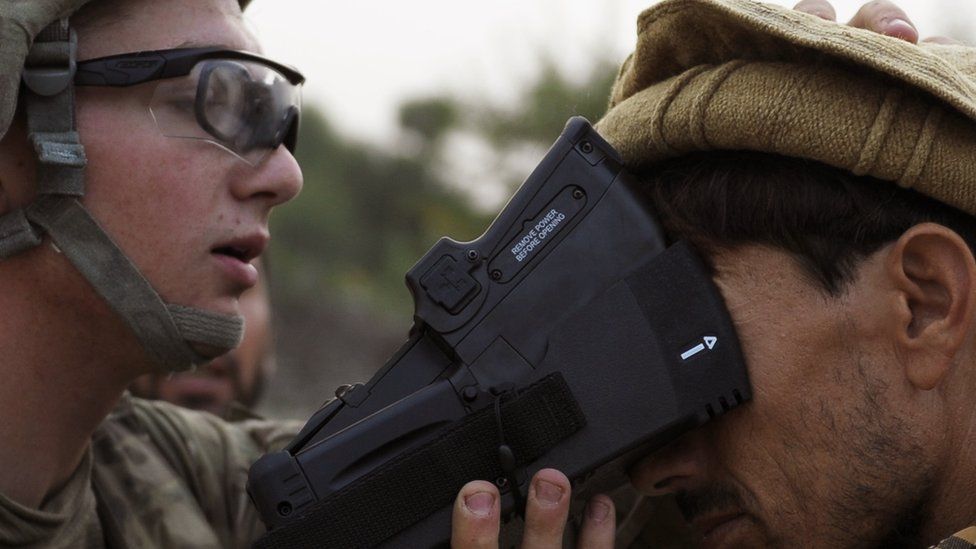 “We would go into villages and enrol people into this biometric data system,” US Marine Special Operations Command veteran Peter Kiernan recalls.

It’s been a busy week for Mr Kiernan. In Afghanistan, he was in charge of 12 local interpreters. Some are still in the country when we speak, and he’s trying to help them leave.

For those who worked with US forces, leaving is a matter of urgency.

A United Nations document recently seen by the BBC says the Taliban are intensifying their hunt for people who worked for, and collaborated with, Nato and US forces.

And the giant stores of biometric data collected by both the US military and the Afghan government could, some argue, pose a risk to those facing reprisals.

Brian Dooley, a senior adviser to activist group Human Rights First, told the BBC’s Tech Tent podcast that while very little was definitively known, “a very educated guess would say that [the Taliban] either has or is about to get their

On Tuesday, news site the Intercept said military sources had told it that some HIIDE devices had fallen into Taliban hands, while Reuters reported a Kabul resident saying the Taliban were making house-to-house inspections using a “biometrics machine”.

An Afghan official told NewScientist biometric infrastructure was now in the hands of the Taliban.

Mr Kiernan, a member of US think-tank The Truman National Security Project, says it is probable that the Taliban have access to some of the coalition’s biometric data, but is uncertain whether they will have the technical know-how to exploit it.

And journalist and author Annie Jacobsen, who has researched military biometrics, thinks it is unlikely the Taliban could access large amounts of data gathered by the coalition, even if in possession of HIIDE machines.

She added that no data was shared in bulk with Afghan partners, in case “some corrupt official” was going to tip off possible criminals.

Ms Jacobsen says data from HIIDE devices is not stored in Afghanistan, but in the Pentagon’s Automated Biometrics Identification System, which she calls a “system of systems” because of its complexity.

She feels that on a practical level, social media may be an easier source of information for the Taliban.

The BBC has asked the US Department of Defense for comment.

Biometrics, including face recognition, were also used to check voter registration in 2019 elections.

The country even launched a register of businesses and plans to collect biometric data from students in madrassas.

In 2016, an Afghan broadcaster reported that the Taliban had used a biometric reader to identify bus passengers who were members of the security services in a violent ambush that claimed 12 lives.