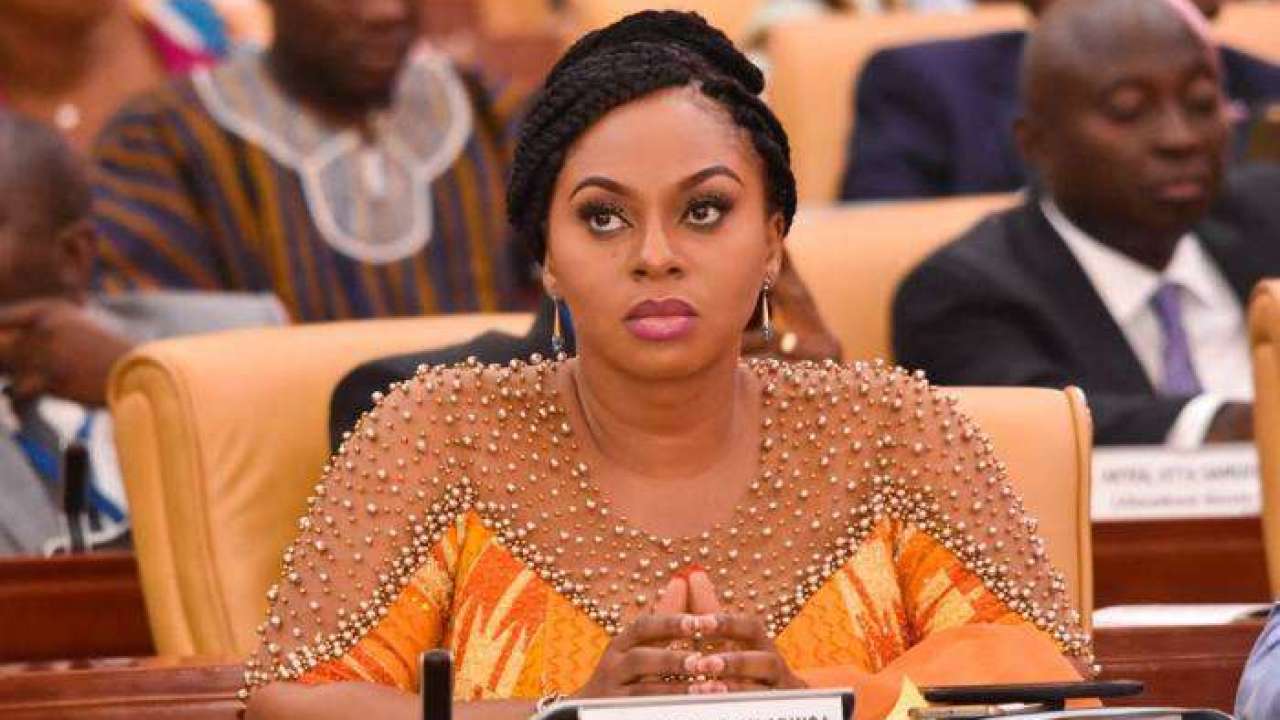 Adwoa Safo is the daughter of a famed Ghanaian Apostle Kwadwo Safo and she is Lawyer by profession. She is also the Minister of Gender and Women Affairs. Before then, she had served as the deputy Majority Leader and Minister at the presidency in charge of Procurement. However, in recent times, Adwoa’s name has come to be associated with what many observers claim “politically incorrect.”

First, there was the allegation that Adwoa’s imposter voted in her stead during the first voting that accompanied the controversial E-Levy nuisance that has temporally stalled every other national conversation. That issue is hanging with the minority swearing to what seems to be a criminal act on the part of the Dome-Kwabenya MP.

From the minority NDC’s standpoint, at the time the first voting was called, Adwoa was still in the United States (USA)  where she had given birth. That accusation was vehemently disputed by the Majority NPP. The Dome-Kwabenya MP had since remained silence on the allegations; thus given rise to many speculations and interpretations to the accusation.

Since that debacle, Adwoa has refused to take her seat in Parliament. She has also refused to assume office as minister of state at the Gender Ministry, although her annual vacation or leave has long elapsed. Adwoa’s reticent posture is hurting the ruling party’s determination to pass the E-Levy tax because the former is lacking the requisite majority vote to pass the draconian levy with Adwoa’s absence from the chamber.

There’s even the contention in certain circles that the Chief of Staff once located Adwoa at her home and did the bent-knee bid to convince Adwoa to rescind her decision and report to the House Chamber but all to no avail. With Adwoa’s absence, the majority strength is reduced by one and that will lead to the loss of the NPP in any ballot cast on the E-Levy passage. Technically speaking, with Adwoa’s absence, the NDC has assumed the majority role in Parliament. Even in the likely event that the Fomena MP joins the NPP caucus, there will be split numbers—137—137.

So far Adwoa’s posture has been spun in many interpretations with some even suggesting that she should be sacked from Parliament to make way for a by-election in her constituency.

On the flip side there are others who believe that will be real gamble for the ruling government. There is no guarantee that the NPP could win the Dome-Kwabenya seat; “despite the NPP safe seat label” especially, in a by-election that people do not have much interest.

Credible sorties by this writer has however revealed that Adwoa is still miffed by the impersonation allegation and feels that her party did not support her enough in that fiasco. Perhaps, Adwoa may be right. This is because many Ghanaians who spoke on the subject still hold the belief  that the Hon. MP was nowhere near Ghana’s Parliament that fateful day.

What’s so irking to Adwoa is her obvious row with the late wife of NPP stalwart, Major Courage Quarshigah. The late Agriculture Minister died during President Kufuor’s administration. Mrs. Quarshigah has before Adwoa’s re-designation as Gender Minister been the National Coordinator of the Ghana School Feeding Programme (GSFP). The Ghana School Feeding Programme operates under the Ministry of Gender and Women Affairs.

On assumption of office,  Adwoa Safo terminated the appointment of Mrs. Quarshigah, claiming she couldn’t work with her. Adwoa Safo’s termination letter read: “This is to inform you of the termination of your appointment as the National Coordinator of the Ghana School Feeding Programme. You will be paid one month’s salary in lieu of notice as stipulated by your contract agreement. The letter further directed Mrs. Quarshigah to hand over to the Chief Director of the Gender Ministry. No reason/s was/were assigned for her removal.

Adwoa Safo was however, ordered by the powers that be, to reinstate the widow of Major Quarshigah. Mrs. Quarshigah was reinstated after 24 hours of her dismissal by the appointing authority. Adwoa was thus forced to write a second letter which tone seemed apologetic to the GSP Coordinator. In fact, she stated in her reinstating letter that her first letter was an “administrative error.”

Obviously, dissatisfied by the party resolution of the matter, she took a pre-mature vacation and subsequently took her maternity leave, without first reporting while she was still on vacation  and has since refused to step foot at the ministry, although she had long located to Ghana after giving birth in the US.

Another of Adwoa’s issues with her party hierarchy is that her Municipal Chief Executive for Ga East was also rejected by her Municipality and thought with her proxy closeness, to the seat of power, the President could have “smuggled her candidate” through.  Adwoa’s candidate Elizabeth Kaaki Mann was accused of impersonating as a student of the University of Professional Studies (UPS). In the absence of Adwoa Safo, Cecilia Dapaah has been asked by the President to stand-in for the AWOL Adwoa Safo.