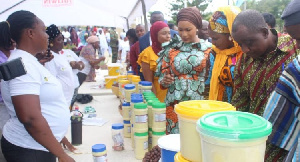 The Ghana Export Promotion Authority, (GEPA) says it will set up support for the development of the shea industry in the coming years.

She said this in a speech read on behalf at the launch of the World Shea Expo on the theme: “Repositioning the Shea Industry to Accelerate Ghana’s Export Diversification Agenda within the context of Ghana Beyond Aid.”

The Expo, which will bring partners within the value chain such as Processors, women pickers, Farmers, Researchers, Aggregators, various Associations and women groups, financial institutions is aimed at promoting the product and creating both local and international markets for businesses.

It was to publicly recognise the efforts and contributions of women, youth and the small to medium enterprises who dedicate their time to pick less than 40 per cent of nuts in the bush annually and to also bring to forth the extensive research work that has been done by the Research Station Department of Cocobod to reduce the gestation period of the Shea tree.

It said it will promote and highlight the contributions of Shea butter in the development of the rural women of the seven Northern Ecological Zones that have the comparative advantage over the production and processing of Shea nuts and butter for the International Market.

It is to bring together the business community, pharmaceutical companies, the cosmetic industry, investors, processing companies, government, development partners and researchers to boost and unearth the economic potentials of this sector.

She said their Regional offices in the two Northern Regions have been working closely with Shea butter extractors and cosmetics producers.

“A good number of cosmetics producers have also benefitted from GEPA’s assistance to participate in several trade fairs and exhibitions in the last two years, including fairs in the USA, MIDDLE EAST, EU and within the ECOWAS.” she added.

She said these have resulted in significant exports to those countries and beyond.

She said, “all these ongoing transformations in the shea sector would enable us to take a share in the global trade in shea and shea products.”

She said GEPA has prioritised a number of key export products, which hold immense market prospects.

These products include shea and its derivatives and indeed, the new National Export Development Strategy document, which was completed recently and awaiting the approval of the Ministry of Trade and Industry and then Cabinet has laid emphasis on the development of Shea.

“GEPA wholeheartedly supports the Planting for Export and Rural Development programme because of its capacity to increase the production of selected major tree crops, including Shea for domestic consumption and for export,” she added.

Madam Asabea Asare said global trade in Shea and its derivatives was set to increase based on international trade statistics, and Ghana was poised to benefit from this positive trend as the country was one of the few producers of this important cash crop.

Dr Emmanuel Agyemang Dwomoh, the Deputy CEO in Charge of Agronomy and Quality Control, who read the speech behalf of the CEO of COCOBOD said the Board through the Cocoa Research Institute of Ghana (CRIG) continued to support the Shea industry by way of scientific research and making appropriate grower recommendations on problems relating to the crop.

He said there had been increased financial support for research at the CRIG’s Sub-Station, Bole in the now Savannah region over the past three years.

He said with the support gestation period of shea has been reduced through top working by grafting; rooting of shea stem cuttings successful and transplanted rooted cutting, which can fruit after four years.

“The transplanted grafted materials can fruit after four years,” he added.

He said they had developed hybrid materials, which were vigorously growing faster than the normal seedling.

The main event will take place in Tamale at the Aliu Mahama Sports Stadium from April 22 – 25th, 2020.