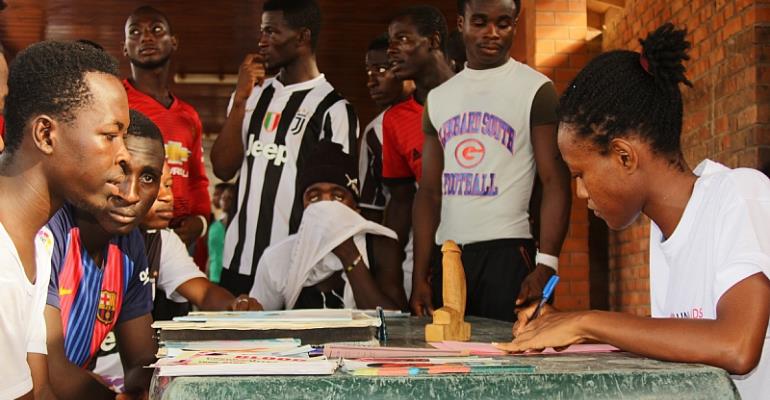 …During A Health Screening Exercise

The Programmes Coordinator of Know Your HIV Status Street Campaign Program in the Central Region of Ghana, Mr. Samuel Nana Effah Obeng has revealed that out of 89 individuals who voluntarily tested their HIV status in Elmina at Ahomka Fie, one person proved positive.

He said this in an interview after an aerobics and games session for the people in Komenda Edina Eguafo Abirem Municipality.

Mr. Obeng indicated that though the number recorded for those who tested positive was minimal, it is one too many and we should yearn to have zero HIV infection in the country.

He further went on to disclose that, last Saturday recorded the largest number of individuals who got tested in the street campaign initiative and attributed that to the rigorous campaign of the team over two months.

The initiative, which had funding support from UNAIDS and spearheaded by Ocea1TV, was the fourth edition designed to empower the citizenry to know their status, thereby helping to minimize the spread of the Human Immunodeficiency Virus, identifying individuals who carry the virus and to provide effective counseling sessions and drugs to persons infected.

In his presentation, Counsellor Michael Tagoe of the Planned Parenthood Association of Ghana encouraged parents to educate their wards on sex-related issues since that is a sure way of securing the future from Sexually Transmitted Infections. He said girls as young as 10 years old get pregnant or are infected with Sexually Transmitted Infections largely because sex education has been relegated to the background.

For her part, Miss Anita Paddy, a psychologist, advocated for vigorous health promotion with an aim to encourage all to know their HIV status. She said but for the fear of stigmatization and discrimination, a lot of people would have known their HIV status. Miss Padi charged the religious organizations to use their platform to fight against discrimination and stigmatization and to also encourage their members to get tested.