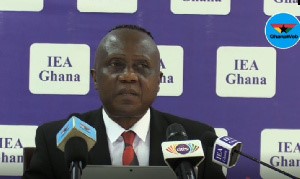 Director of Research at the Institute of Economic Affairs (IEA), Dr. John Kwakye has  asked  the government to adopt pragmatic measures in the 2022 budget to seal all loopholes in Ghana’s tax system to rake in more revenue for development.

Ghana loses a substantial amount of revenue annually through illicit financial flows such as trade misinvoicing, transfer pricing and various forms of money laundering, as well as tax exemptions.

Ahead of the budget presentation next week Wednesday, Dr. Kwakye, in an interview with the media called for stringent measures to address the unending canker.

“The problem with Ghana is that we are operating at levels that are just too low. If our revenue was higher than our expenditure, I’ll not be so much worried because then you’ll be raising the equilibrium level of the economy. But our expenditure is way above our revenue and as an economist, I get worried because we’re crawling and no one seems to be interested in raising more revenue,” he lamented.

“I’m not even talking about taxing people more because our tax rates are already high. I’m asking the government to collect the taxes that they don’t collect so that we can use it to fund our expenditure so we can sustain the deficit.”

Ghana has, for many years, lost huge amounts of money due to the lack of proper tax collection systems and the inability to monitor the figures.

In the first half of 2021 alone, the Ghana Revenue Authority had witnessed a GHS212 million shortfall in tax revenue.

The Authority collected GHS25.89 billion in tax revenue as against 26.1 billion cedis targeted for the period.

This had left the country’s tax to GDP ratio staying far below the 20 percent target the government wants to achieve by 2023.

Many analysis shows that the country is unable to achieve its target due to illicit financial flows and several loopholes in the tax system.

Studies by international agencies and some development partners estimate the annual revenue loss from illicit financial flows at about US$3-4 billion, while the country is said to lose more than GH¢5 billion annually through tax exemptions alone.