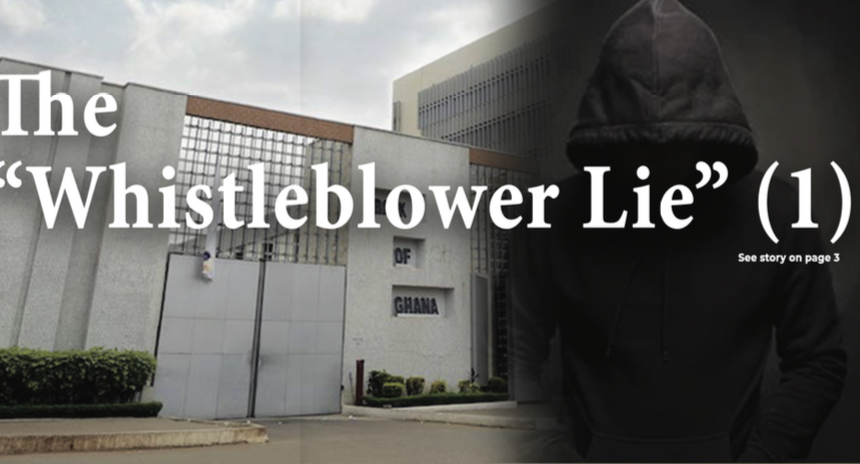 On 8th February 2019, the man who the Bank of Ghana called the “Whistleblower” (name and
identity withheld for now) wrote a letter to the Governor of the central bank with reference to the
letter he wrote to him dated 24th September 2018.
In that letter, the writer indicated that his actions had been “misinterpreted”.  Therefore, he was
writing to withdraw the letter accusing GN Bank and Dr. Papa Kwesi Nduom of illegal treasury
activities.
Our readers will recall that one of the most stinging and hurtful allegations made by the Bank of
Ghana in revoking the license of GN Savings was that the company had illegally and without
appropriate documentation transferred millions of depositors’ funds to an affiliate in the USA
thus engaging in money laundering.
This allegation had been repeated over and over by Central Bank officials, government
personnel, party officers and communicators.
It will be recalled that this same allegation is what was seized upon by a Ghanaian lawyer based
in the USA who was aided by some Ghanaian public officials (news story under development),
to harass Dr. Papa Kwesi Nduom.
It is worthy of note that on November 23, 2021, USA District Judge Thomas M. Durkin
dismissed in its entirety a lawsuit filed against Dr. Papa Kwesi Nduom, his wife and children,
directors and management members of one of his American companies.  The complaint was filed
by the Birim Group a California Limited Liability Company whose sole member is a Ghanaian
born lawyer, Kwasi Asiedu.  The dismissal was definitive.
The basis for the complaint or lawsuit was the acquisition of a claim made by one Mavis
Amanpene-Sekyere and another about an alleged inability by one Groupe Nduom company to
honour her request for the redemption of an investment she made with the company.
The lawsuit filed in the USA alleged money laundering and fraud citing $63 million dollars
supposedly transferred illegally to the USA.  The lawsuit got the attention of the Bank of Ghana
Governor Ernest Addison who called it a “vindication”.  So damaging were these allegations that

Groupe Nduom and its companies have suffered huge and unprecedented financial losses and
unimaginable damages to their credibility the world over.
It is instructive to note that the person who led the so-called whistleblower to the Governor of the
Bank of Ghana is an APSUNIAN, just like Dr. Nduom and used to work at the central bank.
That man acted in the vein of Ghanaian folklore that the insect that will bite you comes from
your own cloth.
For the benefit of our readers, what’s a whistleblower?  Wikipedia defines a whistleblower as
“…a person, often an employee, who reveals information about activity within a private or
public organization that is deemed illegal, immoral, illicit, unsafe or fraudulent. Whistleblowers
can use a variety of internal or external channels to communicate information or allegations.”
It is clear from our investigations that the man referred to as the GN Bank whistleblower is an
ex-employee of the bank who had several scores to settle with former executives of the bank
including the CEO. It is in settling these scores that caused the terrible accusations he later came
to regret. Indeed, he had reportedly sent messages to Dr. Nduom to apologize for his actions
and expressed his gratitude for Dr. Nduom giving him a job at the bank when he desperately
needed one.
Weekend Today has through its investigations obtained the letter dated 2 nd November 2018 that
Dr. Nduom sent to Dr. Ernest Addison the Governor. In that letter, Dr. Nduom wrote that, “As
indicated during our meeting on Wednesday, I am taking the letter sent by Mr. xxxxxxxxx to you
dated 26 September 2018 personally.  In my humble opinion, this man cannot be the source for
the official investigation that has caused considerable disruption in our organization.
It is my view that if I had been invited by the Bank of Ghana to respond to the allegations made
by Mr. xxx, this matter would not have gotten this far. Therefore, while management of GN
Bank prepares its responses to the preliminary draft report from BSD, I am sending to you my
response to Mr. xxxx’s letter for your review.”
Dr. Nduom proceeded to dismiss the allegations raised in the so-called whistleblower letter.
After that, Dr. Addison the Governor could not and till this date has not been able to prepare a
reply to Dr. Nduom’s letter. He was thoroughly shocked that Dr. Nduom had been able to
identify the person being paraded as the whistleblower. He could not fathom how Dr. Nduom
got a copy of the letter that formed the basis for what became the central bank witch hunt.
But, apparently, the central bank and its accomplices in government had gotten what they
wanted. They took the wild allegations and used them to attempt to soil the significant
international reputation gained by Dr. Nduom from more than 40 years of local and international
professional experiences.
The question a number of people have asked is why did Governor Addison continue to use
allegations that had been withdrawn by the one who made them? Now that the courts have
thrown away the money laundering allegations, will Governor Addison apologize to Dr. Nduom
for the significant harm and injury caused? We are certain that more questions will be raised

when people in authority in Ghana get to understand the truth and the facts that support position
taken by Groupe Nduom that a lot of harm has been caused without justification. In Ghana, we
know that “Sankofa, wonnkyir”.